Black Star Update Report
Global seismicity is higher than expected for the 6 and key 2.5 to 4-magnitude earthquake events for the final week of the 2015 Earth Orbit Cycle relative to the inbound Black Star now moving through the Libra Constellation just below the ecliptic plane. My feeling today is that my projections for seeing the lowest number of the 2.5 to 4-magnitude earthquake events for the coming week will not be fulfilled, as our planet continues seeking equilibrium in the aftermath of so many large/deep earthquake events particularly around the northern and southern regions of the Pacific Ocean/Ring of Fire where the two deep magma waves stalled along the Alaskan and southern Mexican coasts through the current earth change lull period. The magma plumes and magma upwelling are rising throughout these regions playing havoc with my predictive modeling taken from seismic data over the last few orbit cycles representing a pronounced game changer generated by the Pacific Ocean/Ring of Fire Reset since the Solomon Island Quake Events centered on February 6, 2013, the 7.8 Nepal Quake at last year’s nearside alignment, the record-deep 7.8 Japan Quake at 677 kilometers, the 8.3 Chile Quake in South America and the two 7.7 Peruvian Quake Events at more than 600 kilometers deep responsible for creating gigantic rising magma plumes and increased regional volcanism in those rapidly-changing areas.

Current seismic/volcanic indicators suggest that my sub-200 value for the weekly global 2.5 to 4-mag quake events will not happen like we saw last year in the week of January 19th and the year before in the week of January 5th to begin previous orbit cycles. This in no way means the Black Star has slowed down or sped up velocity along the elliptical orbit path that crosses Earth orbit path along the 1.6 million-mile segment of space our planet travels in natural orbit around the Sun on May 20th of each year. Those following my research already realize that my predictive modeling will eventually break down entirely from near-Black Star/Earth proximity and that is precisely what I believe we are seeing in the seismic chart today; and exactly what we should expect moving forward. Look below at the first for weeks of the 2014 Seismic Chart to realize the big Jolt Value (536) for the 2.5 to 4-magnitude quake events followed the yearly low value of just 176 much like we see for the 2015 orbit cycle where 180 events jumped to 343. The Jolt for this year is also in question should our planet never reach that sub-200 value, because in previous years we did not have the large/deep magma plumes rising to the surface causing seismic values to fluctuate on the higher end of the scale. In other words, Earth is in jeopardy of not seeing the brief resting period with the sub-200 quake value to then begin moving towards the Black Star to experience the recognizable jump in these key indicator quake values, but extremely-hot rising magma plumes have entered the seismic/volcanic modeling equation giving appearances on the surface that Earth core is remaining hot; throwing a monkey wrench into the forecasting equations.

The two 7-magnitude quake events from Week 53 were not expected and were not present in any of the recent Earth orbit cycles earning the 2 a red designation. The 23 value for the 5-mag quake events is down from 35 last week indicating that Earth remains in the earth change lull period, even though we may not see the sub-20 value like on previous cycles for reasons already explained above. Another consideration is that perhaps I have been lucky in recent years for the lull-to-uptick period to begin very near the weekend, as the reporting begins each Sunday to end the following Saturday helping to highlight the sudden jump and the Jolt Values in the seismic charts, but we will know much more in a month or so; looking back at the seismic data for indications of a pattern that fits the data for previous years.

Earth saw five new volcanic eruptions this week with focus on Kamchatka and South America where the two magma waves have stalled. We should expect to see this value remain on the high side of the scale moving through the coming earth change uptick period that should begin slowly and then gain momentum, as our planet turns around in orbit to move towards the Libra Constellation. 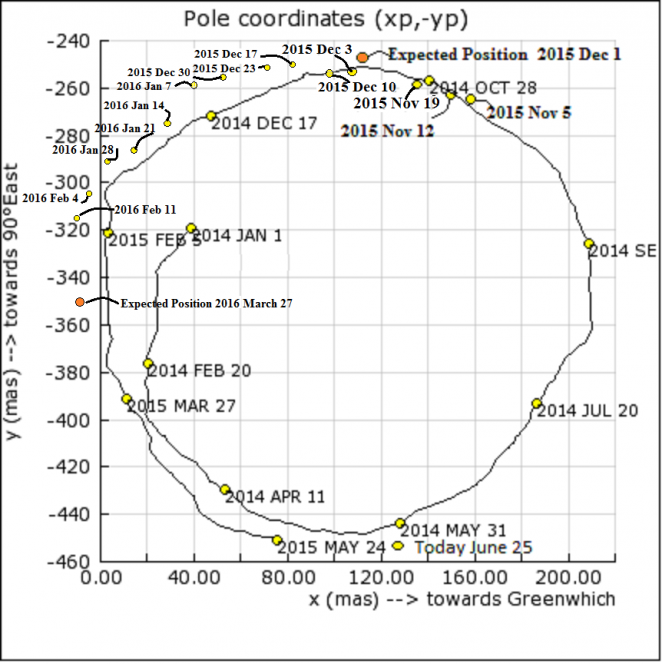 The migrating magnetic North Pole slowed down comparted to the big move last week and is now expected to make the nosedive move relatively straight down towards my March 27, 2016 expected position that likely should be located just below the -360 position rather than on top. Allow about three days for the magnetic North Pole to be positioned directly beside last year’s position on February 5, 2015 and we have a 9-day differential, which is only about two days off from the 11 to 12-day lag we see in the seismic chart readings. For more information see “Mike’s Migrating Magnetic North Pole Request” on Page 10 of this newsletter among the Featured articles. John DiNardo has been contributing more information to the newsletter lately sharing views on date setting of earthquake events among other topics. Our email exchange is included in this newsletter under the story heading “Earthquake DATES: Disregard Broussard, & Terral’s Perils,” beginning under Michael’s article on Page 10 for those interested.

Project heroes for this week include Vobear, Michelle, Sara, Autumn and Leonard all supporting the research and subscribing to Terral’s 2016 Newsletter at http://terral03.com. Kirk wrote and wants to renew his subscription manually and Randi made another donation to the research. Jackie canceled her subscription after years of project support. A link to my recent radio show interview with BadBaby is provided in the first Featured article answering Bonnie’s Black Star Questions and in the Radio Section on the final page of this newsletter to become a permanent link for those interested. Thank you very much to everyone supporting the research and making the investigation possible.

Read the Full Report and related articles using a complimentary link to Terral’s 2016 Newsletter Volume 6. Subscribe and support the research at http://terral03.com