Seismic, volcanic and magnetic North Pole migration indicator all say Earth is about one month into the first earth change uptick period for the 2016 Earth Orbit Cycle relative to the Black Star now moving left in the orbit diagram in the Libra Constellation relative to the Sun.

Year-over-year seismic values remain low for the 5 to 7-magnitude earthquake events like in previous years for Week 3 of the orbit cycle with the 2.5 to 4-magnitude earthquake events still on the high side, as the Jolt Value for Week 2 from previous orbit cycles is included in this Week 3 value for the 2016 Cycle. That 259 high value is expected to fall to levels just above 200 over the coming weeks, until climbing high leading up to the anticipated Sun/Earth/Black Star nearside-alignment (N) quake events scheduled for May 7, 2016. We can already see that the single 7-magnitude earthquake event for Week 4 of the 2015 Cycle has already taken place with the recent 7.8 Sumatra Quake (USGS) from yesterday May 2, 2015 working to establish a similar seismic pattern to what we saw last year only about two weeks later for 2016 as expected. The next Jolt Value (J) comes in Week 5 for the 6-magnitude quake events where we should see around five events recorded for this same week in 2014 and 2015, but again two weeks later for each calendar year; because of the 11 to 13-day delay in starting each Earth Orbit Cycle relative to the Black Star and leftward movement in the orbit diagram. We should also expect a low value for the 5-magnitude quake events for Week 4 that could easily double for Week 5 due the Black Star magnetic portal connection shortening rapidly through this critical period of the orbit cycle.

Earth saw four new volcanic eruption events this week again with focus on the very locations where the two deep magma waves stalled at the end of the last earth change uptick period in the areas of Kamchatka and Nicaragua in Central America. The top Featured Story for this week concerns massive carbon dioxide outgassing (video) taking place along the US West Coast representing the “Convergence Zone” where these two deep magma waves are expected to converge to change everything for the entire US/Canada West Coast later in the timeline with eyes focused on May 7, 2016 and the Cascadia Subduction Zone. While nobody can predict when these two magma waves will actually converge to cause massive crustal displacement along the US West Coast, we should assume that these two magma waves will regain momentum/intensity nearing the end of each earth change uptick period marked by the nearside and backside alignments that begin the two well-defined earth change lull periods for each orbit cycle.

My view is that these massive carbon monoxide outgassing events are caused by the separation of the tectonic plates pushed against the North American Craton now cascading towards the southwest and the region where the tectonic plate break took place with the Solomon Island Quake Events from February 6, 2013. Those following my research know that I have been issuing these US West Coast Earthquake Warnings since 2014 and the Earth itself is testifying that great danger is coming to the region and sooner rather than later. Everyone should be paying careful attention to the coming earthquake event ‘depths’ for signs that they are progressing deeper and deeper causing increased opportunity for rising magma plumes to have great impact upon the bulging Yellowstone Reservoir/Magma Chamber and regional calderas. 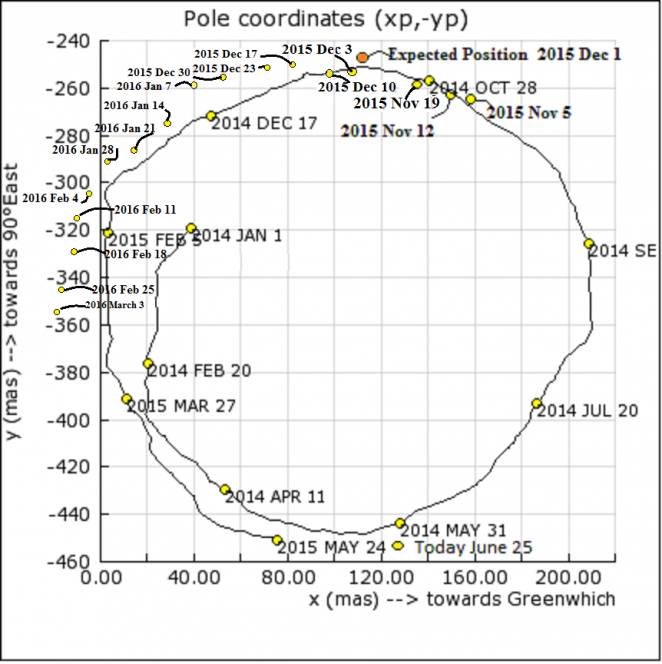 The migrating magnetic North Pole slowed the move down the chart this week. We should see the migrating magnetic pole trail behind last year’s position by the same 11 to 13 days we see in the Seismic Charts since the beginning of this investigation in January 2011, again, because the Black Star is moving a constant 11 to 13 degrees left in the orbit diagram with each new Earth Orbit Cycle relative to Sun.

Bonnie wrote and asked for clarifying statements on this topic that can be confusing to those unfamiliar with the research. We are ‘not’ tracking any Earth Wobble, as if the geographical North Pole has changed position from Black Star influences on the 23.5-degree tilt at each solstice. That kind of external influence would change Polaris as the North Star, which is definitely not happening; according to Don our project astronomer. The migrating magnetic North Pole migration movement is anything but random, as if Earth metals are shifting according to traditional geological modeling. The significance of the magnetic North Pole migration for my Project Black Star Investigation is understood once you realize the same 11 to 13-day lull is plainly apparent in the Seismic Chart pointing to the fact that our magnetic North Pole is under the influence of a third powerful magnet in the inbound Black Star. I made the prediction that the magnetic North Pole would reach of the top of this chart on December 1, 2015 some six months in advance, by simply looking at lasts years date of November 16, 2014 and adding the 11 to 13 days. Now we watch to see if the migrating magnetic North Pole continues to trail last year’s location by the same value, or will the pattern change due to factors beyond our current ability to understand? We shall see.

Project heroes for this week include Orville, Alex, Ryan and Frederick representing four gentlemen subscribing to Terral’s 2016 Newsletter to receive full benefits for the life of their subscriptions. Victory and James renewed their subscriptions from previous years and Randi again made a nice donation to the research already earning Super Subscriber status and Lifetime Benefits for her support. Subscribers and contributors should be aware that I am coming under increasing attack from John DiNardo, Marshall Masters and others over setting dates for events from Project Black Star Predictive Modeling, as if I am committing some kind of crime for gathering sufficient data for constructing superior predictive models forecasting what will happen later in the timeline. That information begins on Page 14 of this newsletter for those interested. This is an exciting time for the research coming in March, April and May for the 2016 Earth Orbit Cycle relative to the Black Star, because this marks the period of the most-intense seismic activity for the whole year, until Earth passes behind the Sun relative to the Black Star in the first week of December 2016. Please share links to this newsletter, my YouTube video updates and radio shows to help others wake up about what is happening all around us. Thank you again to everyone supporting the research for making this investigation possible.

Read the Full Report and related articles using a complimentary link to Terral’s 2016 Newsletter Volume 9. Subscribe and support the research at http://terral03.com.