Seismic, volcanic and magnetic North Pole migration indicators all say Earth is moving into the final stages of the current earth change lull period expected to end in the middle of February 2017 placing the Black Star firmly in the middle of the Libra Constellation relative to the Sun.

Year-over-year weekly seismic values reveal a disturbing seismic pattern with the key 2.5 to 4-magnitude earthquake events reaching the lowest value of the year and the second-lowest value since the Project Black Star Investigation began in January 2011. The lowest value for these indicator earthquake events came in the second week following the massive Solomon Island Quake Event from February 6, 2013 that cracked the tectonic plate in two causing a reset in the entire Pacific Ocean/Ring of Fire that is now transitioning to have greater influence on the seismic/tectonic/volcanic dynamic of the entire world.

The 7.3-magnitude Philippines Quake Event (USGS) appearing on the seismic chart this week took place deep near the bottom of the Earth mantle transition zone at about 613 kilometers adding more energy to the massive magma plume formation testing the magma plume formation terminal ends extending from Indonesia (origination zone) north to the Cascadia Subduction Zone and south across the southern Pacific Ocean to Mexico and west through Nepal to the Italy region having backtracked from Gibraltar moving through the current earth change lull period. See the Equake3D images below (last 30 days +4.5) for obtaining better visual image of how the deep magma plume formation that originated in Indonesia to spread around the Pacific Ocean/Ring of Fire is now circling the entire globe. This explains why we see a moderate number of 5-magnitude earthquake events and very few of the 2.5 to 4-magnitude earthquake events, because of the absence of the smaller-mag precursor earthquake events; because the trigger mechanism creating these earthquakes is coming from the rising magma plume activity rather than slipping along the fault lines between the tectonic plates. 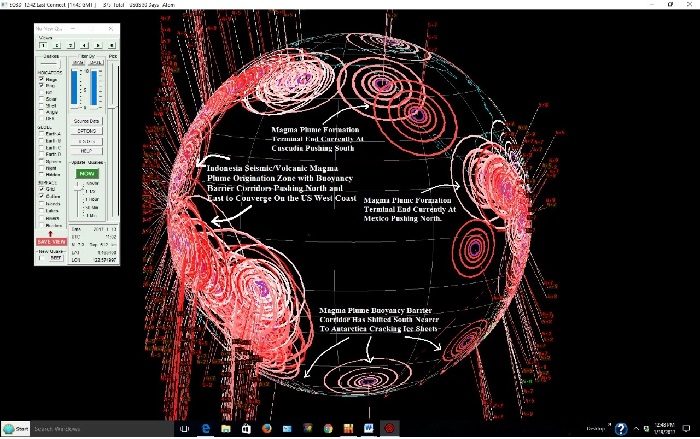 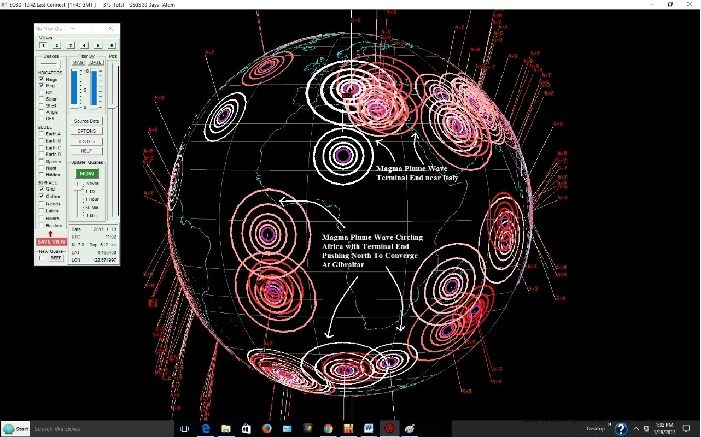 Earth saw seven new volcanic eruption events this week all focused on the Pacific Ocean/Ring of Fire with all of the activity except the Peru event being associated with the rebounding magma plume wave activity along the magma plume formation corridor between Indonesia and Cascadia. The extreme/intense activity along this magma plume corridor is due to the short length relative to the magma plume arms reaching across the southern Pacific Ocean to Mexico and west through Nepal to Gibraltar including the magma plume arm reaching below Africa pushing north towards the Gibraltar region of southern Europe. The primary point to realize is that the magma plume formation continues gathering steam through the earth change lull period representing precursor events pointing to what is coming in late April/early May once Earth core temperature increases from Black Star/Earth near proximity that shortens the Black Star/Earth magnetic portal connection. The conclusion told by the evidence today is that Earth is being influenced by nearing Black Star proximity than most people realize, as this deep magma plume formation has become a massive energy-storing reservoir allowing massive energy to be released all at once later in the timeline once the buoyancy barriers are tested and then broken sending glassy-type magma to the surface from Earth mantle transition zone with massive crustal displacement expected up and down the US/Canada West Coast. 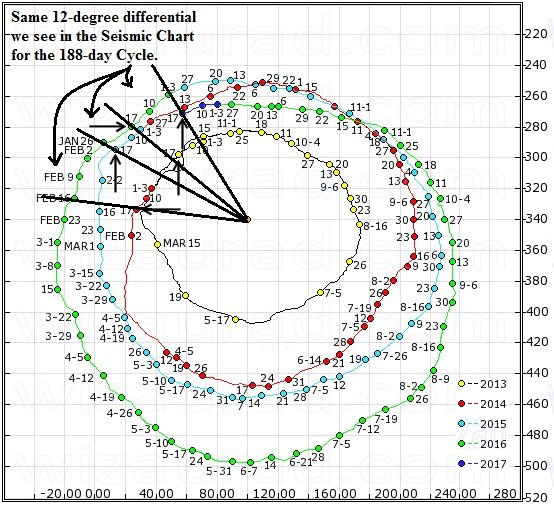 The magnetic North Pole continues trailing last year’s position by the same twelve days (degrees) that we see in the Seismic Chart from the very beginning. This aspect of the investigation is giving me more concern that the modeling pointing to a May 20, 2017 Black Star/Earth crossing event and Black Star/magnetically-induced geological pole shift could be in the cards. Earth still needs to testify with the Sun and the planets moving

through February 2017 and then again in late April moving through early May providing us valuable input data for updating the predictive modeling, as we track what is a gravitational/magnetic anomaly responsible for the changes taking place all around us.

Chris is heading up the Ozarks Survival Group field operations, as per notification emails sent out this week allowing me to focus my attention on doing the research and running the Project Black Star Investigation helping more people to wake up and join the Survival Group Program. Some are lead to believe appointing Chris to run field operations means I have been demoted, or that I have left the Group entirely; which is certainly not the case at all. The decisions being made today serve the best Group interests for providing the very best chances of survival for everyone involved. All Group members should direct survival-related queries and concerns to their Committee leaders and/or to Chris overseeing Group field operations moving forward. Information on Survival Group activities will no longer be shared in these weekly Black Star Update Reports allowing Committee leadership to carry on day-to-day activities with confidence that nothing in these Reports will undermine their ability to accomplish their tasks serving best Group interests.

Project supporters for this week include Tracy, Peter, Anthony, Barbara, Slate, Mike William, David, Nathan, Maarit, John, Lyman, Brenda, Shannon, Wayne, Melinda, Pete and Scott all hitting the Subscribe Button at http://terral03.com to receive full subscriber benefits for just 25 dollars per year. Richard, Andrew, Allan and Peter renewed their subscriptions from previous years with no donations to report for this week. All subscribers should have received your 2017 Notification Email with the 2017 Dropbox Folder Link giving you full access to all 2017 newsletters, my books and related research documentation. If you have not received your notification email, then please write me at the Gmail email account provided in your 2016 notification email and the 2017 notification email will be sent to your inbox ASAP. Thank you again to everyone supporting the research for making the investigation and survival group program possible. Terral

Read the Full Report and related articles using a complimentary link to Terral’s 2017 Newsletter Volume 3. Subscribe and support the research at http://terral03.com.