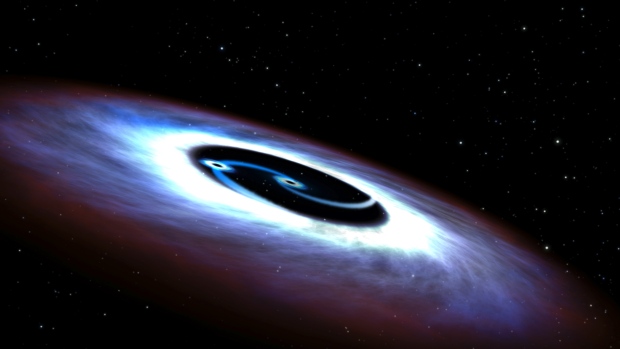 In the Headline Picture Above, Markarian 231, a binary black hole found in the center of the nearest quasar host galaxy to Earth, is seen in a NASA illustration. Researchers have detected gravitational waves coming from two black holes that orbited one another, spiralled inward and smashed together. (NASA/Reuters)

Gravitational waves, ripples in space-time predicted by Einstein’s general theory of relativity 100 years ago, have finally been detected.

“Ladies and gentlemen, we have detected gravitational waves. We did it,” announced Dave Reitze, executive director of the U.S.-based Laser Interferometer Gravitational-Wave Observatory (LIGO) at a news conference Thursday morning.

Scientists said gravitational waves open a door for a new way to observe the universe and gain knowledge about enigmatic objects like black holes and neutron stars. By studying gravitational waves they also hope to gain insight into the nature of the very early universe, which has remained mysterious.

“I think we’re opening a window on the universe,” Reitze said.

“Until this moment we had our eyes on the sky and we couldn’t hear the music,” said Columbia University astrophysicist Szabolcs Marka, a member of the discovery team. “The skies will never be the same.”

Reitze said researchers detected gravitational waves coming from two black holes — extraordinarily dense objects whose existence also was foreseen by Einstein — that orbited one another, spiralled inward and smashed together. They said the waves were the product of a collision between two black holes 30 times as massive as the sun, located 1.3 billion light years from Earth.

“This is the first time that this type of system has ever been seen and this proves that binary black holes exist,” he added. 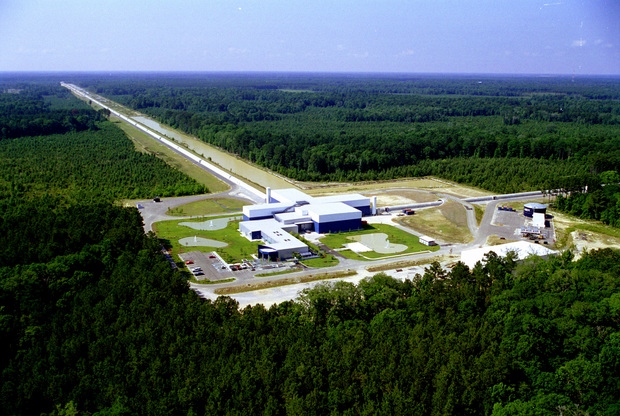 U.S.-based Laser Interferometer Gravitational-Wave Observatory (LIGO) has two detectors – one in Hanford, Washington, and the other in Livingston, Louisiana (above). (LIGO)

The scientific milestone, announced at a news conference in Washington, was achieved using a pair of giant laser detectors in the United States, located in Louisiana and Washington state, capping a long quest to confirm the existence of these waves. 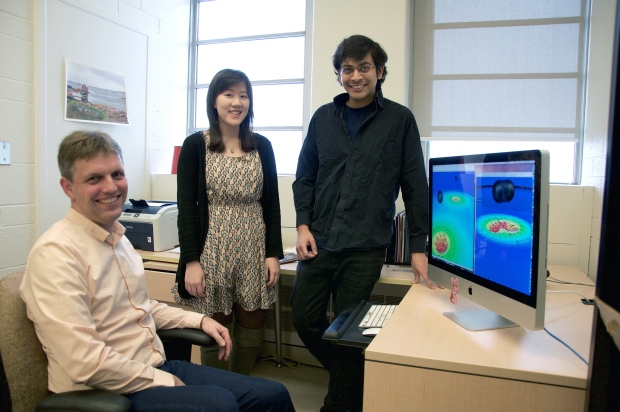 Like light, gravity travels in waves, but instead of radiation, it is space itself that is rippling. Detecting the gravitational waves required measuring 4 kilometre (2.5 mile) laser beams to a precision 10,000 times smaller than a proton.

The two laser instruments, which work in unison, are known as the Laser Interferometer Gravitational-Wave Observatory (LIGO). They are able to detect remarkably small vibrations from passing gravitational waves. After detecting the gravitational wave signal, the scientists said they converted it into audio waves and were able to listen to the sounds of the two black holes merging.

“We’re actually hearing them go thump in the night,” MIT physicist Matthew Evans said. “We’re getting a signal which arrives at Earth, and we can put it on a speaker, and we can hear these black holes go, ‘Whoop.’ There’s a very visceral connection to this observation.”

“We are really witnessing the opening of a new tool for doing astronomy,” MIT astrophysicist Nergis Mavalvala said in an interview. “We have turned on a new sense. We have been able to see and now we will be able to hear as well.”

Harald Pfeiffer and his team at the Canadian Institute for Theoretical Astrophysics at the University of Toronto helped make the software used to analyze the data and look for gravity waves.

In particular, they helped predict what gravity waves from different kinds of black hole collisions might look like.

“It’s easier to find things if you know what you’re looking for,” Pfeiffer told CBC News ahead of the announcement.

The LIGO work is funded by the National Science Foundation, an independent agency of the U.S. government.

Einstein in 1916 proposed the existence of gravitational waves as an outgrowth of his ground-breaking general theory of relativity, which depicted gravity as a distortion of space and time triggered by the presence of matter. But until now scientists had found only indirect evidence of their existence.

Everything we know about the cosmos so far stems from electromagnetic waves such as radio waves, visible light,
infrared light, X-rays and gamma rays. But because such waves encounter interference as they travel across the universe, they can tell only part of the story.

Gravitational waves experience no such barriers, meaning they can offer a wealth of additional information. Black holes, for example, do not emit light, radio waves and the like, but can be studied via gravitational waves.

‘Brand new window on the universe’

“It is really a truly, truly exciting event,” said Abhay Ashtekar, director of Penn State University’s Institute for Gravitation and the Cosmos. “It opens a brand new window on the universe.”

Ashtekar said heavy celestial objects bend space and time but because of the relative weakness of the gravitational force the effect is miniscule except from massive and dense bodies like black holes and neutron stars. He said that when these objects collide, they send out ripples in the curvature of space and time that propagate as gravitational waves.

The detection of gravitational waves already has provided unique insight into black holes, with the scientists saying it has demonstrated that there are plenty of black holes in the range of tens of solar masses, resolving the long debated issue of the existence of black holes of that size.

A black hole, a region of space so packed with matter that not even photons of light can escape the force of gravity, was detected for the first time in 1971. Scientists have known the existence of small black holes and so-called supermassive black holes are millions or billions of times as massive as the sun, but had debated the existence of black holes of intermediate size.

Neutron stars are small, about the size of a city, but are extremely heavy, the compact remains of a larger star that died in a supernova explosion.