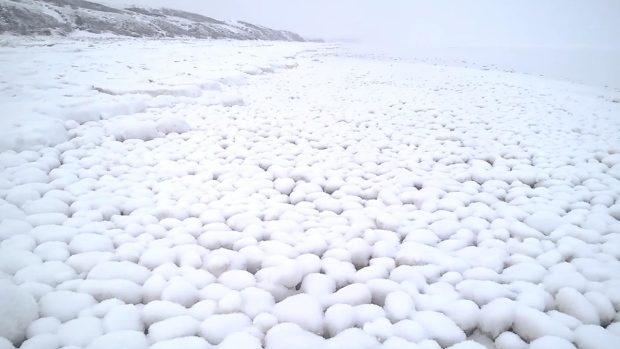 The best place in the world for a snowball fight right now is Nyda, a remote Russian village above the Arctic Circle.

That’s because the battlefield is ready to go, with thousands of snowballs already spread across a beach near the village, courtesy of Mother Nature. Some are perfectly baseball-sized, while many others are much larger (and perhaps, better-suited for building snowmen).

The snowballs appeared on a beach on the Gulf of Ob, in Russia’s Yamalo-Nenets Autonomous region, far, far to the north in Siberia. It’s believed they were created by a rare combination of wind, ice and cold.

The snowball phenomenon has never been recorded in the area before, according to local reports. However, it has happened elsewhere in the world.

Snow or ice balls have formed on Lake Michigan at various times in the last few years. According to experts who explained the Michigan phenomenon, the snowballs are formed when ice sheets break and the chunks are lashed by wind and high waves. Water starts to freeze onto these broken-off chunks, and the wind shapes them into roughly spherical balls.