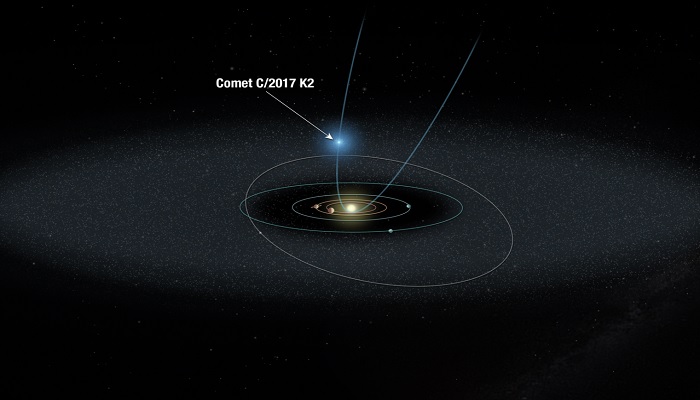 A visitor of our website left a comment on one of our articles from a little while ago that I would like to share. The article he commented on is titled: Comet or Nibiru? Hubble Spots Supposed ‘Comet K2’ – Farthest Active INBOUND Comet To Date, you can take a look at it if you don’t remember seeing it.

“I came across your great website researching Jupiter/Nibiru. You were one of the rare souls who intuited the twain were one and the same.”

(you can take a look at the Jupiter/Nibiru article here: Is Nibiru is Already in Our Solar System

“I assume you know things are going to get very dicey fairly quickly due to the rapidly maturing Grand Solar Minima. The planet is on the chopping block and the crescendo of the master chef’s cleaver is unmistakable. I was wondering how the PTB were going to respond in advance of the certain widespread mayhem a GSM portends. 5G among a variety of other sinister utilities in their dirty little bag of tricks are all on the table and being shuffled around like a deck of Tarot Cards.

Comet K2 obviously has an extremely high electrical potential and without a doubt will have a very disruptive effect on the solar system in 2023…or sooner. If it is Hercolubus, it would explain some of the anomalies taking place on this planet presently. If it entered the heliosphere in the early 60’s it would explain much.

There is the distinct possibility that, given K2’s astronomically huge energetics, it could even reverse the GSM by stimulating the sun back into higher activity. Whither which way the fickle finger of fate directs, the planetary population is headed for a deep down sizing.

On a side note, the message of the yet to be officially published authentic Third Secret of Fatima (returned to uncertain sender-address unknown) was supposed to have been released in 1960….right about the time a large energetic mass entered the heliosphere. The reason given for this delayed release date was that the message “will seem clearer” at that time. Clearly…and who would dispute it…the 60’s were a seminal point of planetary proportions.

Strap on your seat belt….we’re in for one hell of a ride.”

“In my estimation…leaving aside all religious connotations…at least one of the elements of the Garabandal prophesies is presently being fulfilled. It is called “The Warning”. This warning has come as a result of the rapidly progressing Grand Solar Minima which has allowed for a dramatic influx of cognition enhancing cosmic rays…the brain itself being an organic cosmic interface reflecting infinite potential, both scalar interferometer as well as super conductor-collider…as above, so below and even lower (CERN the ultimate mind control technology. It will be synchronized with 5G in an attempt to deliver the death-blow, both body, mind and soul). Cosmic rays have the effect of augmenting each individual’s current state of spiritual progression…or regression. While there are indications of an increased flow of the milk of human kindness, levels of aberrant human behavior and demonic possession are on the rise.

The “Quickening” appears to be progressing in direct proportion to the exponentially increasing acceleration of the approach of “Comet” K2. K2 could be a planet orbiting Hercolubus or the Comet-Planet itself. A bow shockwave within the all-pervading luminiferous aether is building ahead of the yet unknown intruding mass as it races towards perihelion. It is compressing both time and consciousness in ways not experienced in millennium…producing at once both shock and awe as it prepares to burst upon the solar system scene.

The “Chastisement” associated with the revelations of Garabandal is dependent upon humanity’s response to “The Warning”…the outcome of the cosmic ray induced process of deep introspection, as to whether humanity spiritually rises to the occasion or descends to an even darker level of activity and consciousness.

Then there are the exo-players…the extraterrestrial hierarchy: the Cherubim and the Seraphim, the Watchers and the Circle Makers…how they will interact with humanity as it goes through the rebirthing process and humanity enters into the most interesting-thrilling and terrifying-of all times. Hair will bristle, stand on end and turn gray. The Gods and Demi-Gods are gathering with great expectation as the curtain rises upon the world stage for the final act. A monumental cosmic event, illuminated in celestial light.

The quest is cosmic consciousness….the essence of which one seeker told me was the Mother Lode of the currency of the universe.”

I very much appreciate the comments Robert, thanks.