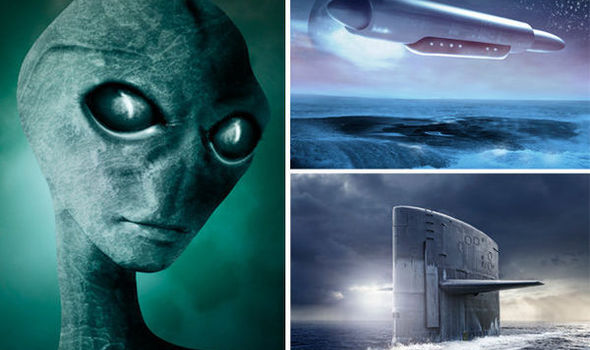 A SECRET “cold war” in the icy depths of the ocean has been taking place between aquatic aliens and the Russians, a new book has sensationally claimed.

Files detailing the mysterious USOs – unidentified submersible objects – are kept tightly under lock and key at the Kremlin, according to UFO authors Paul Stonehill and Philip Mantle.

The pair claim to have obtained leaked details of some of the encounters between Russian submarines and giant unexplained objects.

They believe the Russian government has attempted to debunk any witness who went public to hide evidence of what was going on beneath the waves.

Mr Stonehill and Mr Mantle explain how a Russian commander of the Military Diver Service, Major General V Demyanenko, warned his crews about the creatures after a number of strange encounters in 1982.

Soviet Navy divers allegedly attempted to capture one of the creatures – clad in a silvery suit and wearing sphere helmets.

The dive team of seven were then reportedly thrown to the surface by a mysterious force as they tried to grab the creature in a net.

Other strange cases include a huge fireball seen emerging form the ocean by the steamship Raduga while sailing in the Red Sea in 1965.

The shape allegedly hovered 150m above the surface surrounded by a gigantic pillar of water before it dived down again.

Apparently, Admiral VA Domislovsky, chief of the Russian pacific fleet’s intelligence department, saw an object around 900 metres long hovering above the water in the Pacific Ocean.

He claimed it spat out smaller objects which descended into the waters, before collecting them sometime later and flying away.

And, Rear Admiral and nuclear submarine commander Yury Beketov claimed to have experienced USO activity in the Bermuda triangle – with unidentified objects on their radar screens moving at 250mph below the surface.

Mr Mantle said: “The Soviet Union’s military fleet commanders guarded its secret of the USO subject and those witnesses who tried to go public were swiftly ridiculed and their sightings were officially debunked.

“But despite their best efforts USO reports were made public and no matter what the Soviet officials tried to do the USOs will not simply go away.