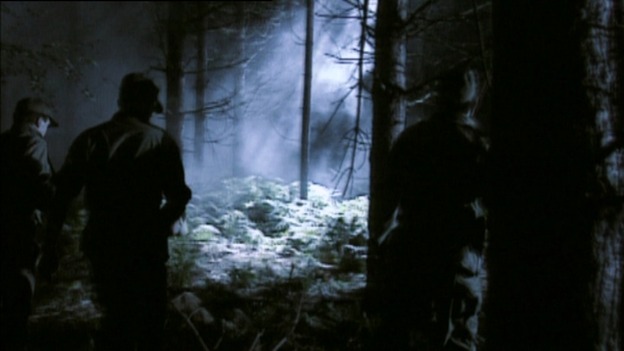 A KEY witness in the UK’s most baffling mass UFO sighting has gone on record for the first time about what he saw hovering over an air base 36 years ago.

The Rendlesham mystery has been dubbed Britain’s Roswell after the mystery and infamous UFO crash that allegedly happened outside the town in New Mexico, USA in July 1947.

The UK alien sighting happened when three US officers based at RAF Bentwaters claimed a “triangular shaped craft” landed in neighbouring woods in the early hours of December 26 1980.

The case was later investigated by the UK Ministry of Defence (MoD), but it concluded there was no evidence of alien visitations or any national security risk, and the sightings were most likely the result of beams of light from a nearby coastal lighthouse.

Steve Longero, a former US Airforce military police officer based at the airbase at the time, has remained tight-lipped about what he saw in Rendlesham Forest ever since.

But, now in a magazine interview, he has revealed he believes what he saw came from outer space and could have been aliens.

He said: “I think it was something not from this world.”

Mr Longero was guarding the weapons storage area when the alarms started going off.

He said: “While on duty that night we had a very sophisticated alarm system and everything just went off.

“And then I could see these lights over the treetops, and I was thinking, what’s going on?

“Then they started sending people out there and at first it was hard to believe, all these bright lights.

When Mr Longero went into the forest it was swamped with other military personnel.

He told Outer Limits Magazine: “I could seem them hovering over the treetops like an eye that almost following everybody.”

Mr Longero says at a debriefing afterwards the witnesses were sworn to secrecy “as the base had nuclear weapons on site.”

Colonel Charles Halt, 76, who was base deputy commander at the time and features in a newly-published book about the case.

Mr Halt claimed the officers who first saw the lights then a UFO “on the floor”, could not account for a 40 minute period while searching in the woods when their communication systems went “off air”.

The three officers – John Burroughs, Bud Steffens, and James Penniston, told the MoD of feeling “static” as they observed the object’s flashing lights and hieroglyphic-like markings.

Mr Halt then said on the evening of December 27 1980 that officers had shouted “It’s back, the UFO’s back”.

Mr Halt went to investigate with a team who found three 1.5inch “impact holes”, damage to the canopies of trees and “higher radiation levels” in the “landing” area.

A plaster cast was later taken of one of the holes, but mysteriously disappeared from a box it was stored in.

Mr Halt said soon after they saw a mysterious object in a field between the woods and a farmhouse with “a red light moving.”

He said: “It came towards us into the forest, moving, bobbing up and down in the trees. It was oval, about 100 to 150 yards away, with a dark centre and red around it.”

He claimed there were “sparks” coming from it and after a minute it “exploded and disappeared.”

In May, a documentary revealed the testimonies of two former military technicians who claimed a UFO WAS caught on radar and seen from the control tower of RAF Bentwaters and RAF Woodbridge as well as in Rendlesham Forest, near Woodbridge, in Suffolk, at the time of the sightings.

UFOs and Nukes: The Secret Link Revealed, which is available to view online on Vimeo, revealed the accounts of Jim Carey and Ike Barker who were said to be manning the radars and control tower at the time.

Comment left by a reader (MalMal): “I drove through the forest some years ago, throughout my drive my GPS did not function, could never explain why.”