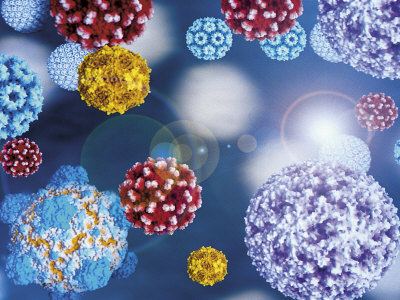 We may think we’re independent, capable individuals, calling the shots in our lives from a place of personal freedom, but a new breed of research offers a somewhat terrifying counter argument to this belief. Incredibly, microbes can have a profound effect on our personalities and behavior — and even cause us to be more accident prone.

While quite a bit of focus has been on the gut microbiome — and how it shapes our overall cognitive and mental health — recent discoveries have led scientists to believe this influence extends to viruses and parasites as well. Which brings us to the question: are these microscopic creatures controlling our behavior without us knowing about it?

Microbes Made Me Do It

“Now, I think this is part of what makes parasites so sinister and so compelling. We place such a premium on our free will and our independence that the prospect of losing those qualities to forces unseen informs many of our deepest societal fears. Orwellian dystopias and shadowy cabals and mind-controlling super villains — these are tropes that fill our darkest fiction, but in nature, they happen all the time.” ~ Ed Yong in Suicidal Wasps, Zombie Roaches and Other Parasite Tales

Roughly half the world’s population carry Toxoplasma gondii — a parasite that infects both wild and domestic cats, along with many warm-blooded mammals, including humans. Toxoplasma is also known for severely changing the behavior of rats, to the point where they seek out cat urine, which makes them an easy meal for felines. Here’s the brilliance of the parasite: it can infect pretty much any mammal, but is only able to reproduce in cats. In order for the parasite to survive, it’s developed an ingenious mechanism to alter the region of a rats brain that governs fear, anxiety and sexual arousal. “It has two genes that allow it to crank up production of the neurotransmitter dopamine in the host brain,” said Glenn McConkey of the University of Leeds, United Kingdom. Dopamine regulates the fear, pleasure and attention centers in the brain. The neurotransmitter is associated with schizophrenics as well, who have higher than normal levels.

Researchers in the Czech Republic believe T. gondii may have subtle, but far-reaching implications for human hosts — and even cultural norms. Behavioral changes caused by the parasite manifest differently in men and women. Males who are infected tend to be more introverted, oblivious to other people’s opinions of them, inclined to disregard rules, emotionally less stable and easily upset. While females are more intelligent, rule and image conscious, conforming, moralistic, outgoing, attentive to others, kindly and easygoing. On top of that, infected men have less fear and take more risks, leading to a statistically higher chance of having an auto accident.

People that live in humid, low altitude regions, where freezing and thawing are infrequent, are at greater risk of infection — largely because T. gondii cysts live longer in these climates. The cysts can be found in cat feces, soil, raw or undercooked meat, water, unpasteurized milk and unwashed vegetables. The United States, Scandinavian countries and England have relatively low infection rates, whereas countries like France, where consuming undercooked meat is common, have a higher instance of infection. Tropical regions of Latin America and sub-Saharan Africa are also prone to high rates.

Still not convinced that parasites can act as microscopic puppeteers? Consider this: according to Dr. E. Fuller Torrey, Associate Director for Laboratory Research at the Stanley Medical Research Institute, there is a clear association between toxoplasma and schizophrenia in genetically susceptible humans.

Moreover, Dr. Torrey and a team of Oxford scientists ran an experiment to see if haloperidol would alter the behavior of T. gondii parasite controlled rats, which it did. The antipsychotic drug proved to be as effective as pyrimethamine — a pharmaceutical specifically used to eliminate toxoplasma.

Behavior-Bending Parasites in the Wild

Beyond the question of whether or not parasites influence a humans’ personality, scientists have no doubt that they can radically change behavior in animals, fish, crustaceans and insects.

One of the most well known examples is the rabies virus. When a dog is about to die from a rabies infection, the virus stirs the animal into a rage, causing it to bite another mammal, where the virus will continue to live on. What’s interesting is that, while the virus is causing a neurological meltdown in the dog, it simultaneously migrates from the nervous system to the animals’ saliva, ensuring the virus will be transferred to a different host through a bite.

“Polysphincta gutfreundi, a parasitic wasp that grabs hold of an orb spider and attaches a tiny egg to its belly. A wormlike larva emerges from the egg, and then releases chemicals that prompt the spider to abandon weaving its familiar spiral web and instead spin its silk thread into a special pattern that will hold the cocoon in which the larva matures. The “possessed” spider even crochets a specific geometric design in the net, camouflaging the cocoon from the wasp’s predators.”

But it isn’t all a complete horror show — there’re plenty of instances where these hitchhiking microbes can enrich our lives. A case in point is a study where women who consumed a probiotic laden yogurt displayed less brain activity in the regions that process emotions, compared to those who ate yogurt without probiotics. Another clinical trial showed that patients suffering from irritable bowel syndrome had reduced feelings of depression when given probiotics. And beneficial bacteria help our immune system, assist with digesting food and generate vitamins. You can read more about this bizarre and compelling world in Ed Yong’s book, ‘I Contain Multitudes: The Microbes Within Us and a Grander View of Life‘.

We humans set a premium on our own free will and independence … and yet there’s a shadowy influence we might not be considering. As science writer Ed Yong explains in this fascinating, hilarious and disturbing talk, parasites have perfected the art of manipulation to an incredible degree. So are they influencing us? It’s more than likely.