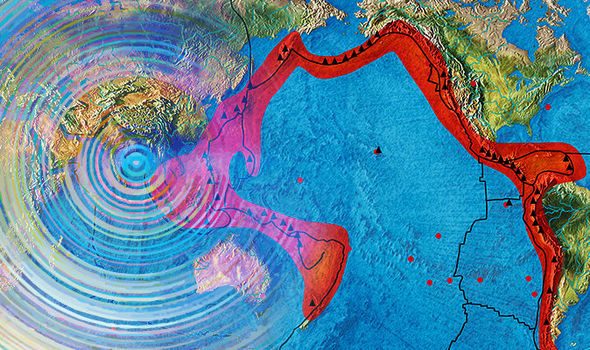 Well I hate to say it but I think the scientist who warned that we would be seeing an increase in larger earthquakes this year due to Earth’s rotation slowdown might be right.

Also note worthy, this scientist William Yeck of the USGS seems to think none of the activity as of late are connected, well none of us can say for certain but seeing as they are all on the ‘ring of fire’, it would seem that they ARE connected to each other. Let’s see how things go from here.

Volcanic eruptions in Japan, the Philippines and Bali. Massive earthquakes in Alaska and Indonesia.

The rash of natural disasters over the past two days have one common denominator: they all occurred along the so-called Ring of Fire, a sprawling horseshoe-shape geological disaster zone.

At least five different events occurred on the Ring of Fire on Monday and Tuesday, including a magnitude 7.9 earthquake that rattled the town of Kodiak, Alaska, and the eruption of Mount Kusatsu-Shirane near a ski resort northwest of Tokyo.

While the series of cataclysmic activity has come in rapid succession, scientists say most of them occurred thousands of miles apart and there is nothing to suggest they are connected.

“It’s very unlikely that these things are related,” William Yeck, a research geophysicist for the US Geological Survey, told ABC News on Tuesday.

Yeck said the Ring of Fire, which encompasses 452 volcanoes and where more than 80 percent of world’s largest earthquakes occurred, is constantly active.

The Ring of Fire stretches 25,000 miles. It goes from New Zealand up through Indonesia, the Philippines and Japan, and then across the Aleutian Islands and down the coasts of Alaska, Canada, the West Coast of the United States and all the way down to the tip of South America.

“It’s largely the Pacific plate that makes up the majority of it,” Yeck said.

But the ring also includes the Philippine Sea plate, Juan de Fuca and Cocos plates, and the Nazca Plate.

The tectonic plates fit together like a puzzle, but are constantly moving and colliding with each other, thus producing numerous earthquakes.

In addition to the volcanic eruption in Japan and the earthquake in Alaska, a magnitude 6.1 earthquake occurred off the southern coast of Java, Indonesia’s mainland, on Tuesday. Also Tuesday, Mount Agung in Bali and Mount Mayon in the Philippines blew their tops, spewing red-hot lava and causing the evacuations of thousands of people.