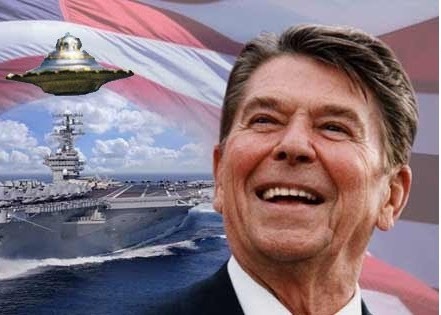 There is an often cited quote of Ronald Reagan addressing the U.N. wherein he states, “I occasionally think how quickly our differences, worldwide, would vanish if we were facing an alien threat from outside this world.” This quote is routinely pointed to by UFO buffs as indicating not only Reagan’s belief in UFOs, but that he actually had some sort of insider knowledge of UFOs. Personally, I’ve always thought that was a bit of stretch. To me it just seems like a clever way of telling a room full of humans who can’t get along to get their shit together.

However, after reading this leaked transcript of Ronald Reagan’s briefing on UFOs I’m starting to wonder if he wasn’t trying to subtly let certain members of the U.N. know – primarily Russia – that, yes, you Ruskies we know all about those ETs you’ve met with and you know what, we’ve met with a few ourselves.

I’m not saying that I totally believe this transcript, of course. But it does put a different twist on his quote that – if the transcript has any validity at all – indicates his quote is, in fact, a bit more than just a clever allegory to a roomful of man-children.

According to the website Serpo.org’s introduction to the transcript…

Transcript of classified tape recording made at Camp David, Maryland during a presidential briefing regarding the subject of UNIDENTIFIED FLYING OBJECTS and EXTRATERRESTRIAL VISITATION of EARTH. President RONALD REAGAN was present. The recording was made between March 6 and 8, 1981.

Like many leaked documents regarding UFOs there’s no way to know for sure if this is real, but it’s still a fascinating read. The document is one of many found on the website Serpo.org – The Zeta Reticuli Exchange Program (sounds legit!) which claims…

The information [on Serp.org] began to be released on 2 November 2005 by a retired senior official within the US Defense Intelligence Agency (DIA) who calls himself “Anonymous”. Until he chooses to make his name known, this is the way he will be represented here. Anonymous reports that he is not acting individually and is part of a group of six DIA personnel working together as an alliance: three current and three former employees. He is their chief spokesman.

Without much further ado, here’s the link to the alleged Reagan briefing on UFOs…get ready for a fun ride: