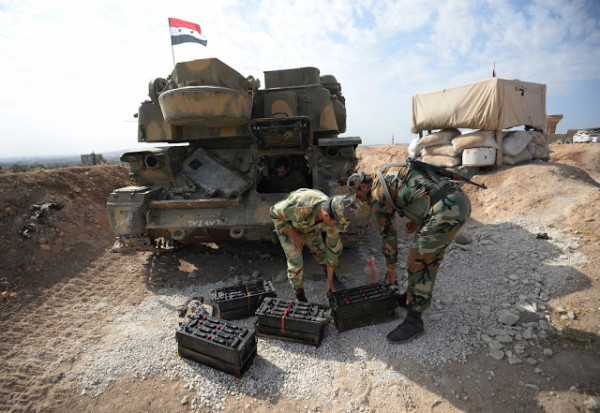 West’s proxy terrorists are slowly becoming eradicated. Disguised as the sudden interest for the Syrian crisis, the US is sending forces to support their allies.

While it is obvious the US and its allies are responding directly to the collapse of their proxy forces across the country, their most recent threats to further escalate the conflict in Syria are tenuously predicated on “fighting ISIS.”

In reality, Turkey and Saudi Arabia have played a central role in both the intentional creation of ISIS and the logistical and financial perpetuation of its activities within Syria and Iraq. This is not according only to enemies of Ankara and Riyadh, but according to their central most ally, the United States.

It is clear then, that this sudden interest in escalation has nothing to do with ISIS and more to do with rescuing the West’s proxy terrorists before they are entirely eradicated and/or expelled from the country.

Russia, who has played a pivotal role in reversing the tides against Al Qaeda and ISIS militants in Syria, has even gone as far as accusing Turkey of what appears to be an imminent military incursion into the country’s northern region.

ISIS, as it has always been designed to be, serves merely as a pretext for justifying any prospective operation by the US and its regional allies – an operation that will be in all reality aimed at challenging and rolling back Syrian and Russian gains on the battlefield – or at the very least, providing an unassailable sanctuary within Syrian territory for the West’s defeated proxies to retreat to.

In many ways, this has been attempted already to one degree or another in terrorist-occupied territory in Syria. As Syrian forces with Russian aircover moved into northern Aleppo, reports across the Western media complained that infrastructure underwritten by Western governments was being destroyed. This infrastructure, including bakeries literally run by Al Qaeda using flour supplied by the US government, was part of Brookings’ plan to “make these zones governable.”

The presence of Russian military forces in Syria has apparently prevented the West from making these zones more “defensible” through the use of direct military force aimed at Syrian troops.