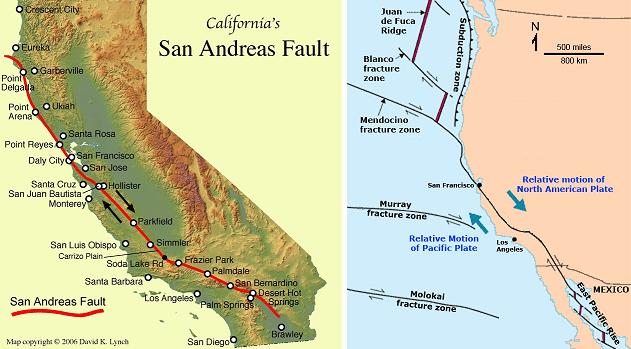 A Magnitude 6.5 earthquake rattled the northern California coast on Thursday morning, swaying buildings in Humboldt County and releasing enough energy to be detectable in San Francisco. This was a signature earthquake of a part of California that may be as overlooked in earthquake science as it is in popular culture. Though the phrase “California earthquake” brings to mind San Francisco and Los Angeles – and rightly so due to the high seismic hazard in those urban centers – the region offshore Humboldt and Del Norte counties, called the Gorda deformation zone or the Gorda plate for short, is by far the largest producer of moderate and large earthquakes anywhere in California or on the West Coast. California has experienced six earthquakes of magnitude 7.0 or greater in the past 40 years; four of these have come from the Gorda plate and the faults that surround it, as well as several earthquakes of similar size to Thursday’s M=6.5 event. 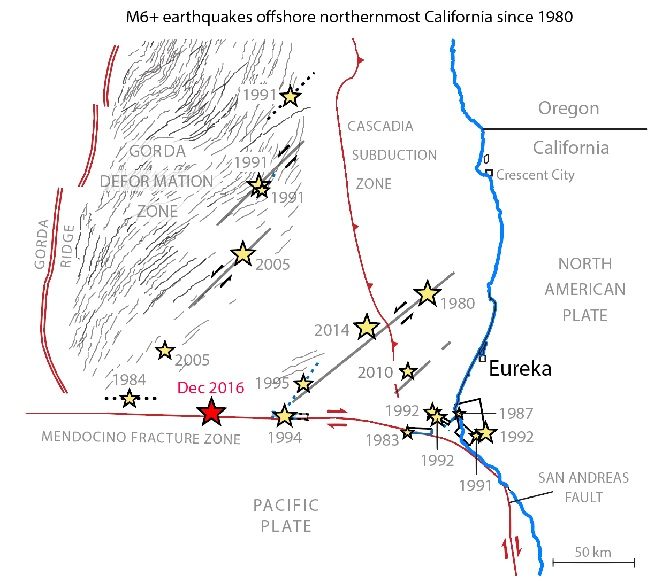 Locations of M6+ earthquakes in and around the Gorda deformation zone since 1980.

Why are there so many earthquakes here

The high rate of earthquakes in the Gorda plate results from its role as a messy and still-evolving transition zone between the tectonics of California and those of the Pacific Northwest. To the south, the Pacific and North American plates move laterally past one another along the San Andreas Fault, famously offsetting fences in Point Reyes and house foundations in Hollister. To the north, the smaller Juan de Fuca plate is subducted beneath the North American plate along the Cascadia subduction zone, producing the volcanoes and tsunami hazards of the Cascades. (The Gorda plate is not a plate per se but the colloquial name for the southern, highly deformed bumper of the Juan de Fuca plate.) At the junction between these two regimes, the San Andreas – having closely followed the California coastline northward from San Francisco – makes a left turn and extends due west into the Pacific, nearly to Midway Island, as a prominent seafloor structure called the Mendocino Fracture Zone. The easternmost 150 or so miles of this structure are tectonically active, acting as the southern border of the Juan de Fuca plate and with it the tectonics of Cascadia, and are more correctly called the Mendocino Fault Zone. Thursday’s earthquake occurred dead in the middle of the active Mendocino Fault Zone at a location approximately 80 miles offshore. The earthquake’s distance offshore meant that damage on land was fortunately minimal, and the sense of slip in earthquakes on the Mendocino Fault Zone involves the same kind of lateral motion that offsets fences on the San Andreas, so this earthquake did not produce the kinds of vertical displacements of the seafloor that can generate a tsunami. Nonetheless, the proximity of this earthquake both to the southernmost reach of the Cascadia subduction zone – which can generate tsunamigenic M=9 earthquakes like the one which devastated northeast Japan in 2011 – and to the northern end of the San Andreas fault – which ruptured from south of San Francisco all the way to its seaward turn in Humboldt County in the 1906 San Francisco earthquake – makes it relevant not only scientifically but also to seismic hazard assessment. 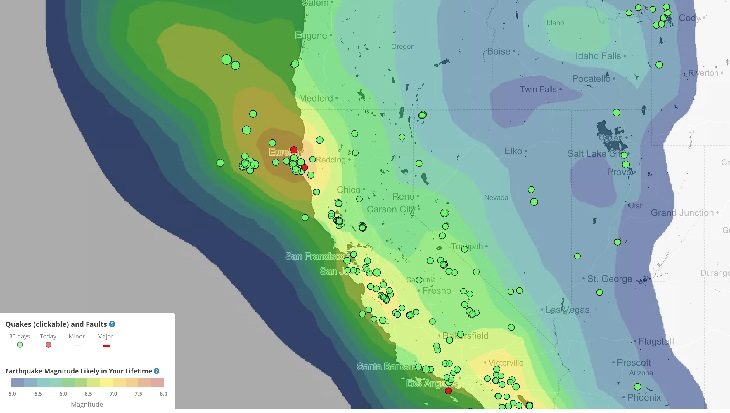 Temblor earthquake forecast map of northern California and surrounding regions. Note the high likelihood of large earthquakes at Cape Mendocino, the point at which the San Andreas makes a westward turn into the Pacific and becomes the Mendocino Fault Zone.

Stress transfer influences timing, location and magnitude of the next earthquake

Research has shown that earthquakes in this region may have the ability to influence each other (in terms of timing, location or magnitude) through the transfer of stress from one fault to another. The intuitive analogy along a single fault is a domino effect: as one section fails, the stress on the neighboring sections will increase. A section of the Mendocino Fault Zone to the west of Thursday’s earthquake ruptured in a M=6.6 earthquake in 1984, and a section to the east ruptured in a M=7.0 earthquake in 1994. Both previous earthquakes should have increased the stress on the section of fault which failed in this earthquake. The Gorda plate to the north is itself undergoing internal deformation that results in frequent earthquakes along faults oriented northeast-southwest. The stress interaction between the east-west Mendocino Fault Zone and these faults is less intuitive, but we find that a M=6.6 earthquake in 2005 (which was itself likely triggered by a M=7.2 earthquake two days prior) may also have increased the stress on the Mendocino Fault Zone at the site of Thursday’s earthquake. 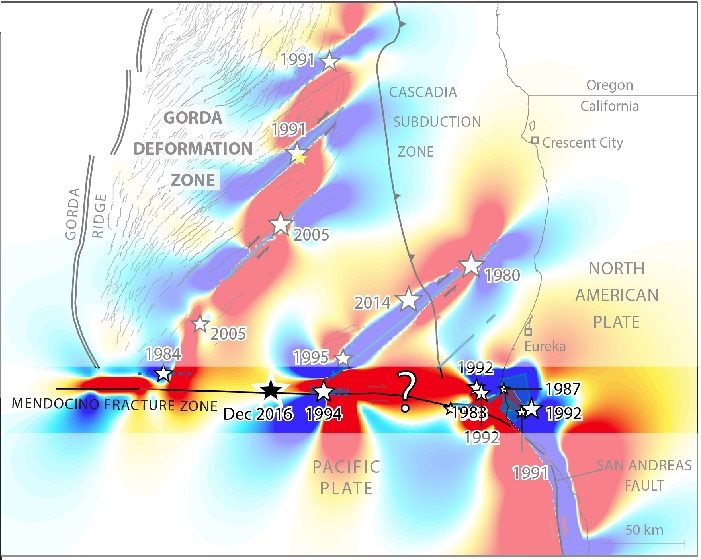 Possible promotion of Thursday’s earthquake by past earthquakes in and around the Gorda deformation zone by the transfer of stress. Red indicates stress increase on a fault; blue indicates stress decrease. (Stress ranges:[-2 bar +2 bar], Receiver fault: 95/81/−159 Depth: 12.00 km Friction: 0.4)

Conversely, Thursday’s M=6.5 earthquake should have increased the stress on the Mendocino Fault Zone west and east of the rupture zone. These stress increases would nominally have the potential to trigger more earthquakes, and a M=4.7 aftershock ~10 miles west of the epicenter of Thursday’s event may have been triggered in this way. In addition, earthquakes on the Mendocino Fault Zone drive the Gorda plate, the north side of the fault, to the east. The Gorda plate moves eastward as it subducts under North America at the Cascadia subduction zone, and so any earthquake that gives the plate an eastward kick, as Thursday’s earthquake did, should increase the stress along the subduction zone.