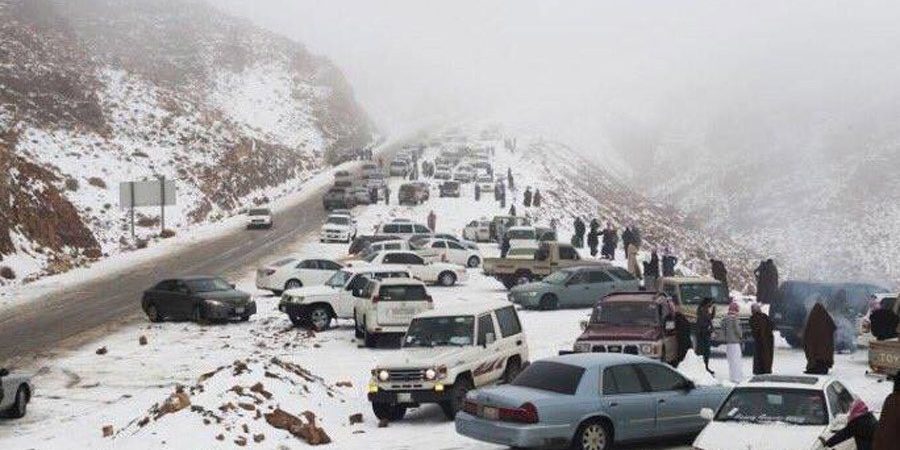 It’s not every day that powdery snow covers the desert sand in Saudi Arabia – but that’s exactly what happened to parts of the country when temperatures dropped below freezing. Saudis are reacting with a healthy dose of humor, and even a few snowmen.

The frigid temperatures and blanket of snow is an unexpected treat for Saudi Arabia’s central and northwest regions, which tend to see daily high temperatures of around 20° C (68° F), even in the November “cold season.”

Some Saudis have taken to social media to express their thoughts on the winter surprise, with one man “skiing” on an icy road.

Another noted that the weather was “so European,” joking that he was asked if he was a scholarship student – a conversation typically had by Saudi students in their (much colder) host countries.

Perhaps unsurprisingly, Saudi drivers didn’t seem too confident on the slick streets, with one image showing a pile of cars pulled over on the side of the road.

Others opted to play in the snow rather than drive, building snowmen which represented their favorite football clubs.

But while the building of snowmen may seem innocent enough, Saudis who took part in the activity during a freak snowfall in January 2015 were condemned by a cleric who called it sinful and “anti-Islamic.” He issued a fatwa (religious ruling) forbidding the activity – though clearly his opinion is not shared by everyone in the country.