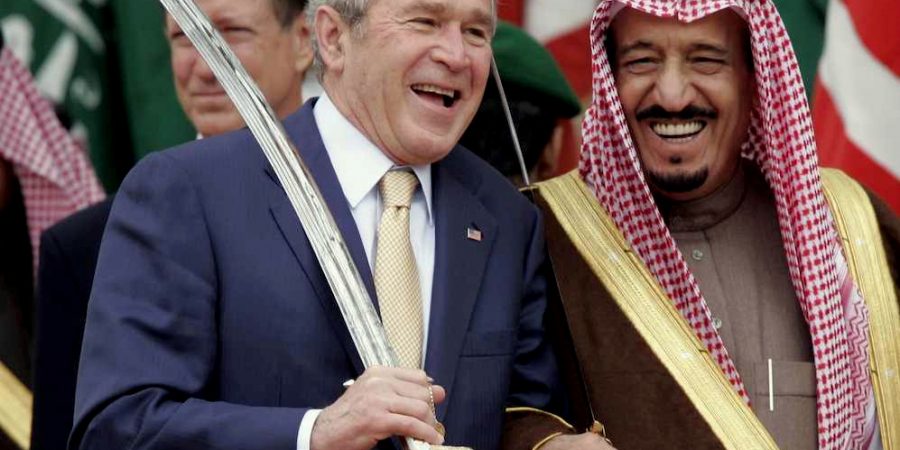 Saudi Ties to 9/11 Detailed in Documents Suppressed Since 2002

AFTER YEARS OF political wrangling, the suppressed section of a 2002 congressional report that detailed possible ties between the Saudi government and the 9/11 terrorist attacks was released today. The classified documents have been the source of heated speculation for years, as they highlighted alleged links between high-ranking members of the Saudi royal family and the 9/11 hijackers.

Many political figures who had previously seen the report led the charge calling for its release, including former Sen. Bob Graham, who said the 28 pages “point a very strong finger at Saudi Arabia,” and Minnesota Congressman Rick Nolan, who said the pages “confirm that much of the rhetoric preceding the U.S. attack on Iraq was terribly wrong.”

The suppressed pages, redacted in parts, detail circumstantial evidence of ties among Saudi government officials, intelligence agents, and several of the hijackers.

“While in the United States, some of the September 11th hijackers were in contact with or received assistance from, individuals who may be connected with the Saudi government,” reads the report, which added that FBI sources believed at least two of those individuals were Saudi intelligence agents.

The report also mentions that numbers found in the phonebook of Abu Zubaydah, a detainee currently held in Guantánamo, could be traced to a company in Denver, Colorado, connected to former Saudi ambassador to the U.S. Prince Bandar bin Sultan.

One of the most notable figures mentioned is Omar al-Bayoumi, alleged by the report to have likely been a Saudi intelligence agent. Al-Bayoumi was in close contact with hijackers Nawaf al-Hazmi and Khalid al-Midhar, providing them financial assistance during their time in the United States and even helping them find an apartment. Bayoumi in turn is believed to have been on the payroll of the Saudi Ministry of Defense and was regularly in receipt of large lump sums of money from the Saudi Ministry of Finance and other undisclosed arms of the government.

Another figure highlighted in the documents is Osama Bassnan, a Saudi citizen who was an associate of al-Bayoumi and lived in an apartment nearby al-Hazmi and al-Midhar. According to the report, Bassnan “made a comment to an FBI source after the attacks suggesting that he did more for the hijackers than al-Bayoumi did.” Bassnan and his wife received regular payments from the wife of Bandar bin Sultan. On one occasion, Bassnan is said to have received a check directly from Bandar’s account.

Fahd al-Thumairy, a former Saudi consular officer in the United States who served as an imam at a mosque attended by al-Hazmi and al-Midhar, is also mentioned briefly, as is Saleh al-Hussayen, who is described in the report as a “Saudi Interior Ministry employee/official.” Al-Hussayen stayed at the same hotel as one of the hijackers in the days before the attack. While being interviewed by FBI agents after the attacks, al-Hussayen “either passed out or feigned a seizure,” causing the interview to be terminated. He later managed to successfully flee the country.

Much of the information in the 28 pages is not new and has been mentioned in previously released documents on the 9/11 investigation. As such, the public release of these suppressed pages is unlikely to precipitate major changes in the relationship between the United States and the Saudi government. In a statement issued on Friday, the Saudi Embassy in the United States said that it “welcomes the release” of the suppressed pages, saying that they exonerate Riyadh of any direct role in the attacks.

While the report does not find any smoking gun pointing to official Saudi involvement, it does highlight one consistently troubling theme of the kingdom’s response to the attacks: its refusal to cooperate with investigators seeking to uncover information about the hijackers. As the report notes, “In testimony and interviews, a number of FBI agents and CIA officers complained to the [inquiry] about a lack of Saudi cooperation in terrorism investigations both before and after the September 11th attacks.”

Referencing a May 1996 Director of Central Intelligence memo, the report cited agency beliefs that “the Saudis had stopped providing background information or other assistance on Bin Ladin because Bin Ladin had ‘too much information about official Saudi dealings with Islamic extremists in the 1980s for Riyadh to deliver him into U.S. hands.’”