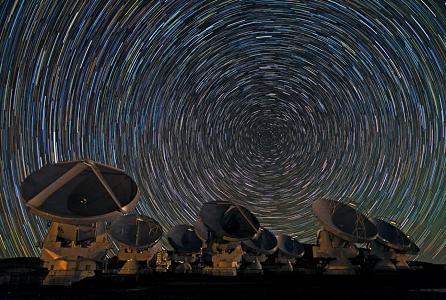 It’s a big, dark presence at the farthest reaches of our solar system, a mysterious force powerful enough to skew the paths of planets in orbit and yet so subtle that it slips undetected past even the most powerful telescopes on Earth. For centuries, it has eluded some of the most brilliant minds in astronomy — some say it even destroyed one. It’s the subject of endless calculations and rampant speculation, crackpot theories and countless hours spent gazing, fruitlessly, at the night sky.

And on Tuesday, a group of astronomers said they’d found not just one such presence, but two of them.

“ALMA discovers the most distant object of the solar system,” read the title of one paper uploaded to the research-sharing site arXiv. “The serendipitous discovery of a possible new solar system object with ALMA,” went the other.

Using the Atacama large millimeter/submillimeter array (ALMA), a powerful telescope located in the high desert of Chile, the researchers said they’d come across two extremely large objects skimming through the outskirts of the solar system.

Though both studies were submitted to the prestigious journal Astronomy & Astrophysics, neither has been peer-reviewed or formally published — steps that are par for the course with any kind of serious scientific research but especially when pronouncements of previously unknown planets are at stake. They’re both based on limited observations — just two spottings apiece for each odd object. And even after just 48 hours online, they have garnered a great deal of skepticism within the astronomy community.

But the researchers say they posted their papers with exactly that purpose.

“We specifically wanted to reach the community that could tell us if we overlooked something, in which case we fully intend to withdraw the papers,” Wouter Vlemmings, an astronomer at Chalmers University of Technology in Sweden and co-author on both studies, told Scientific American.

Here’s what Vlemmings and his colleague say they found:

A large rocky something they call “Gna” (for a fast-moving Nordic messenger goddess, one of the authors told Scientific American), that could be an asteroid-type object roughly the size of Ireland zooming around somewhere near Uranus. Alternatively, the researchers propose, it could be an undiscovered planet floating much farther out, or even a brown-dwarf (bigger than a planet, smaller than a star) passing through interstellar space.

Also, a mysterious, unnamed object that appears in the sky close to the alpha centauri system that may be a “Super-Earth” planet far beyond even Pluto or a super-cool brown dwarf that’s really far. It could also conceivably be an icy “trans Neptunian object,” of which there are plenty in the frozen darkness past the eighth planet, but the researchers say that’s less likely (it’s also, not coincidentally, less interesting).

All of which sounds pretty cool — unless you’re Mike Brown, a Cal Tech astronomer who has spent the majority of his careers scanning the farthest reaches of the solar system for just these kinds of objects.

Brown, the self-proclaimed “Pluto killer” who discovered a trans-Neptunian object (big things out past Neptune) that helped dethrone the erstwhile ninth planet back in 2005, would be thrilled to find the long-sought Planet X. He’d be almost as happy to see a paper reporting that other researchers had found it.

But these two papers, he said, are not that.

“The logical leaps are sort of astounding,” he said. “What they really saw they saw is a little blip and then six months later another little blip.”

The evidence that the researchers offer for their findings is too scanty, Brown said, and the probability that they could have stumbled across a huge, planet-like object in a tiny patch of sky is too small. Finding Planet X in the small field of vision they studied with the ALMA telescope, he said, “would be like scooping a cup full of water from the ocean and pulling out the white whale.”

Several other astronomers offered similar commentary in the days after the papers’ initial publication.

Jonathan McDowell, an astronomer with the Harvard-Smithsonian Center for Astrophysics, told Gizmodo it was a “considerable stretch” to claim a outer solar system object had been found based on the information in the reports. There could be problems with the ALMA instruments or other explanations for the “blips” that form the basis of the reports, he said.

This may be a classic case of “we should have waited for the referees’ report before going on arXiv,” he said.

“There’s so many reasons why they can’t possibly be correct,” Brown said. “It’s embarrassing to the field.”

That’s because of Planet X’s “long and sordid history,” as Brown put it. Though the notion of a ninth planet of some kind at the outer edge of the solar system is perfectly legitimate — scientists have long seen it as an explanation for irregularities in the orbits of Uranus and Neptune — it’s been plagued by false hope and unfounded “discoveries.” One 19th century researcher claimed that the planet was a star he was studying and “lost” (really he just lost track of it). Another claimed there must be as many as three planets out beyond Neptune, though he provided no evidence for his conjectures.

But no Planet X researcher was more beleaguered than Percival Lowell, who launched into the search for the distant object in an attempt to redeem himself after he became a laughing stock for suggesting that aliens might be building canals on Mars.

Little did he know that Planet X was no place to find redemption.

Lowell spent years photographing the night sky with nothing more than a primitive camera and borrowed telescope, searching for evidence of a planet whose existence was still only a theory. He died of a stroke in 1916, his search unsuccessful. A lifelong friend said that the failure “virtually killed him.”

But Lowell didn’t fail — at least, not totally. Unknown to him, Lowell actually captured a large, distant object twice in his photographs. We now call that object Pluto.

Pluto would become “Planet X” a decade later, when a farm kid named Clyde Tombaugh working at the Flagstaff, Ariz., laboratory that Lowell founded came across a small moving speck in his own photos of the sky. “That’s it!” herecalled exclaiming.

And for about 80 years, that was it. Until Brown and his fellow astronomers came along and took the title away from poor Pluto.

Meanwhile, modern analysis of the trajectories of our most far-flung space craft — things like the Voyager and Pioneer probes — has found no evidence of gravitational influence of the kind that could be attributed to a distant planet, at least not as early astronomers envisioned it.

Still, the search for Planet X has continued.

“For those of us who actually work on this, it’s embarrassing to even say you might be looking for these sort of things in the outer solar system because there have been so many crazy theories,” Brown said.

So when reports like the two arXiv studies come out, “you worry that when someone finally finds something that’s not crazy, people are going to say ‘Oh, I heard that story three months ago and it’s not real.’”

But Brown may not need to be so concerned. After all, two centuries of failure has not stopped astronomers from scanning the distant corners of our solar neighborhood, bit by bit, searching for something out there that resembles the rock we call home.

Interest in Planet X is plain to see. Even if the planet itself isn’t.