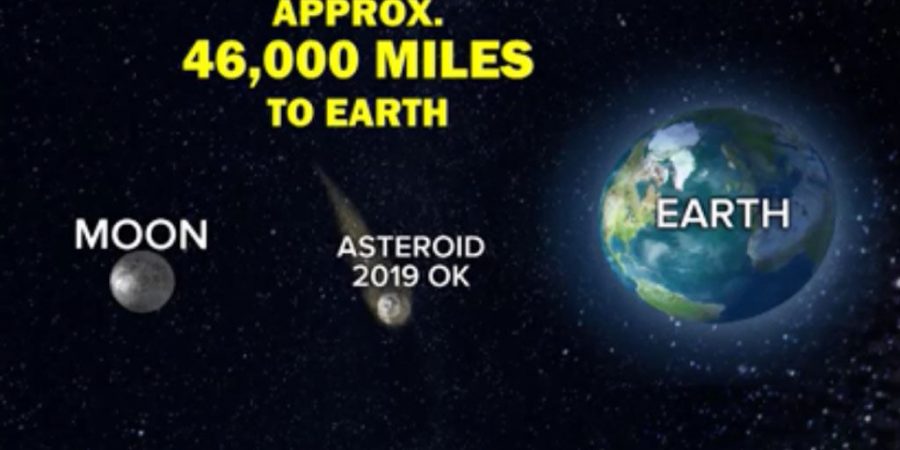 Alan Duffy was confused. On Thursday, the astronomer’s phone was suddenly flooded with calls from reporters wanting to know about a large asteroid that had just whizzed past Earth, and he couldn’t figure out “why everyone was so alarmed.”

The space rock, named Asteroid 2019 OK, came hurtling toward Earth at a speed of nearly 15 miles a second, before flying past on Thursday. Scientists say they had no idea the 328-foot wide asteroid was coming our way.

“I thought everyone was getting worried about something we knew was coming,” Duffy, who is also lead scientist at the Royal Institution of Australia, told The Washington Post. Forecasts had already predicted that a couple asteroids would be passing relatively close to Earth this week.

Then he looked up the details of the hunk of space rock named Asteroid 2019 OK.

This asteroid wasn’t one that scientists had been tracking and it had seemingly appeared from “out of nowhere,” Michael Brown, a Melbourne-based observational astronomer, told The Post. According to data from NASA, the craggy rock was large, roughly 110 yards wide, and moving quickly along a path that brought it within about 45,360 miles of Earth. That’s about one-fifth of the distance to the moon and what Duffy considers “uncomfortably close.”

“It snuck up on us pretty quickly,” said Brown, an associate professor with Australia’s Monash University’s School of Physics and Astronomy. “People are only sort of realizing what happened pretty much after it’s already flung past us.”

The asteroid’s presence was discovered only earlier this week by separate astronomy teams in Brazil and the United States. Information about its size and path was announced just hours before it rocketed past Earth, Brown said.

“It shook me out my morning complacency,” he said. “It’s probably the largest asteroid to pass this close to Earth in quite a number of years.”

So how did the event almost go unnoticed?

First, there’s the issue of size, Duffy said. Asteroid 2019 OK is a sizable chunk of rock, but it’s nowhere near as big as the ones capable of causing an event like the dinosaurs’ extinction. More than 90 percent of those asteroids, which are 1 kilometer, 0.62 miles, or larger, have already been identified by NASA and its partners.

“Nothing this size is easy to detect,” Duffy said of the 110-yard-wide asteroid. ″You’re really relying on reflected sunlight, and even at closest approach it was barely visible with a pair of binoculars.”

Brown said the asteroid’s “eccentric orbit” and speed were also likely factors in what made spotting it ahead of time challenging. Its “very elliptical orbit” takes it “from beyond Mars to within the orbit of Venus,” which means the amount of time it spends near Earth where it is detectable isn’t long, he said. As it approached Earth, the asteroid was traveling at about 15 miles per second, he said. By contrast, other recent asteroids that flew by Earth clocked in at between 2,5 and 12 miles per second.

“It’s faint for a long time,” Brown said of Asteroid 2019 OK. “With a week or two to go, it’s getting bright enough to detect, but someone needs to look in the right spot. Once it’s finally recognized then things happen quickly, but this thing’s approaching quickly so we only sort of knew about it very soon before the flyby.”

The last-minute detection is yet another sign of how much still remains unknown about space and a sobering reminder of the very real threat asteroids can pose, Duffy said.

“It should worry us all quite frankly,” he said. “It’s not a Hollywood movie. It is a clear and present danger.”

Duffy said astronomers have a nickname for the kind of space rock that just came so close to Earth: “city-killer asteroids.” If the asteroid had struck Earth, most of it would have likely reached the ground resulting in devastating damage, Brown said.

“It would have gone off like a very large nuclear weapon” with enough force to destroy a city, he said. “Many megatons, perhaps in the ballpark of 10 megatons of TNT, so something not to be messed with.”

In 2013 a significantly smaller meteor, about 22 yards across, broke up over the Russian city of Chelyabinsk and unleashed an intense shock wave that collapsed roofs, shattered windows and left about 1,200 people injured. The last space rock to strike Earth similar in size to Asteroid 2019 OK was more than a century ago, Brown said. That asteroid, known as the Tunguska event, caused an explosion that leveled nearly 500,000 square acres of forest land in Siberia.

Though the chances of a large asteroid landing on a city are “modest,” Brown said it is still worthwhile to devote resources toward detection and prevention. Brown said Asteroid 2019 OK proves there are “still dangerous asteroids out there that we don’t know of” that “can arrive on our doorstep unannounced.”

Scientists are working on developing at least two approaches to deflecting potentially harmful asteroids, Duffy said. One strategy involves gently pushing the asteroid slowly over time off its course and away from Earth, he said. The other, which he called a “very elegant solution,” is the gravity tractor. If an asteroid is detected early enough, it could be possible to divert it using the gravity of a spacecraft, according to NASA.

People shouldn’t try to “blast it with a nuke,” Duffy said.

“It makes for a great Hollywood film,” he said. “The challenge with a nuke is that it may or not work, but it would definitely make the asteroid radioactive.”

In light of Asteroid 2019 OK, Duffy stressed the importance of investing in a “global dedicated approach” to detecting asteroids because “sooner or later there will be one with our name on it, it’s just a matter of when not if.”

“We don’t have to go the way of the dinosaurs,” he said. “We actually have the technology to find and deflect certainly these smaller asteroids if we commit to now.”

Emily Lakdawalla, senior editor of the Planetary Society, which promotes space exploration, said the recent near miss is a reminder that “it’s an important activity to be watching the skies.” The more that can be learned about an asteroid, the better prepared people can be to prevent potential disasters, she told The Post.

Still, Lakdawalla said that while the asteroid’s close brush with Earth may have sparked some concern, “it is zero percent danger to us.”

“It’s the kind of thing where you learn about something that you didn’t know about, like things flying close by us, and your inclination is to be scared,” she said. “But just like sharks in the ocean, they’re really not going to hurt you and they’re really fascinating to look at.”