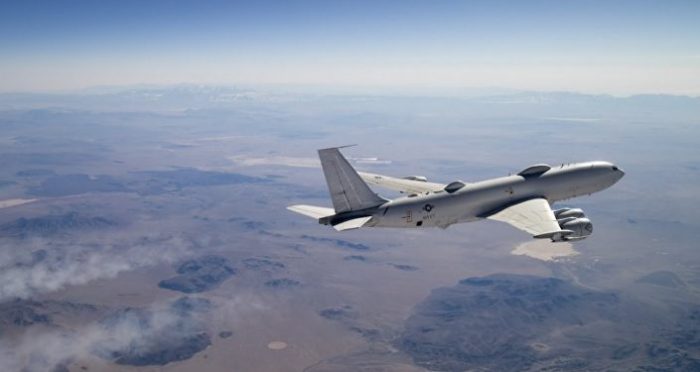 Secrets of ‘Doomsday Plane’ Revealed by US Air Force

One of the planes from the so-called “doomsday” fleet will temporarily become a “National Airborne Operations Centre” if a nuclear war erupts and US military command needs to sustain and control all operations worldwide while avoiding the aftermath of a nuclear weapons strike.

Acting US Secretary of Defence Patrick Shanahan recently embarked on a week-long trip across Asia, aiming to visit Indonesia, Singapore, South Korea and Japan. However, even during his trip he can’t lose touch with US forces on the ground, in the air, or at sea so he travels aboard an aircraft, capable of providing him with all the necessary data and tools – the famous Boeing E-4B “Nightwatch”, also dubbed a “doomsday plane”.

“It’s great, but they keep giving me more work. The work never stops”, Shanahan joked in an interview with CNBC.

There is a reason for such a nickname – E-4B is “like a backup Pentagon” in case nuclear war breaks out, one of the plane’s crew members told the TV channel and added that at least one such plane out of four is always ready to take off “24 hours, seven days a week”.

The plane and its equipment are specifically shielded to withstand the aftermath of a nuclear blast. Its few windows and cockpit glass are shielded against radiation with etched metallic mesh. The equipment, both controlling the airplane’s flight and command centre’s communications, is in turn shielded against electromagnetic pulse (EMP), produced by a nuclear blast. And to further bolster the EMP protection, most of the devices on board are intentionally kept in the pre-digital era.

“It’s a common misconception, but this plane doesn’t have digital touch screens in the cockpit or elsewhere. The conditions that this plane is meant to fly in call for analogue, since digital tech would fry during a nuclear war”, another crew member told CNBC.

In more peaceful times, the E-4B allows Shanahan to stay connected and “never [be] out of the loop” regarding the situation on the ground. The plane hosts an array of around 67 satellite dishes and antennas to serve as a “flying command centre” for the defence secretary.

Boeing’s E-4B “Nightwatch” were first introduced in 1974 and have since been continuously upgraded to stay up-to-date. Their service life is expected to end by 2039.

Russia also has its own “doomsday plane”, the Il-96-400 that was upgraded in 2016 with four powerful engines and advanced avionics. Russia’s airborne command post is capable of flying up to 7,500 miles (12,000 kilometres). Its modified version is also used by Russian President Vladimir Putin during his trips abroad.