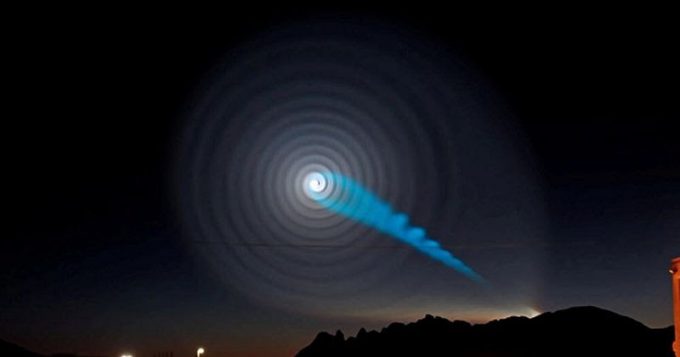 [Author’s note: “The Norwegian Spiral was a spectacular aerial phenomena seen at night from Norway to Hawaii on 12/9/09. Official Russian explanation for the event was: failed flight of SLBM REM-56 Bulava missile. People on ground stood in amazement and confusion as the strange spiral formed in minutes. The two-staged rocket malfunctioned and performed a ‘death spiral.’ The blue is the path of the rocket, the white spiral is the emitted gasses…” Bull$#!t].

We heard the news on television. ‘Breaking News’ first informed Russians, Europeans, Americans and then the rest of the planet that an aerial phenomenon had suddenly appeared in the atmosphere above the area of Scandinavia. It was described by thousands from numerous countries to be a “bright, blue streak emanating from slow-moving, turning, white spirals at one point in the night’s sky.”

The oddity called the “Norwegian Spiral” was filmed, photographed and reported to have disappeared in minutes. News Media told international audiences a “reasonable” explanation of a “Russian missile” and the public in general did not question the bogus information any further.

Few people understood that the exact mysterious phenomenon also occurred high over the British Empire, Italy and Washington D.C on the same evening of 12/9/09. But the other three “visions,” “natural images,” “apparitions,” “dimensional vortexes” or whatever they were only lasted for a second or two and then they completely vanished. Only the Norwegian Spiral remained in the sky for a reported “33 minutes.”

“Conspiracy Theorists” communicated the truth that the blue streak and spiral (over Russia and misnamed for having anything to do with Norway) was actually over Switzerland. Only insiders knew that “other sky events” flashed for only a second at three locations and the fourth, “Norwegian blue streak,” did not point down to Russia or to any launch pad. For some reason, although the truth stood right in front of people, the International Press/Media and united networks (lied) diverted that portion of the news where the bizarre blue line below a weird white swirl led. Reporters’ stories that followed up on such questions were discredited, minimized or squashed entirely.

Could the reason for a cover-up explanation be the fact that for 33 minutes a precise arrow from up in ‘Heaven’ pointed directly down at the Swiss World Bank, the (neutral?) bank accounts of the richest people on the planet and someone on Earth didn’t like it? Someone didn’t like being so noticed and exposed to the world? Could it be that the three other and brief angelic ‘pointers’ were aimed at the Vatican, the Throne of England and the U.S. Pentagon? Could that small, lost fact have had anything to do with lies over the Media in regard to a back-page story of an odd Spiral that only interested geeky star-gazers?

The truth is that the planet Earth averted one more horrendous ‘disaster’ in its long history of violent changes and horrendous disasters. But what did not happen? What was going to happen that did not occur? What kind of big event? Was it a good thing or a bad thing that was averted? Those were the unknown questions to insiders and not the oblivious public.

A few temporal, alien debaters within the dimension of our planet’s Solar System presented the OTHER reality, the one that was about to happen, the one set in motion to happen and that was on the verge of happening, but didn’t…

Four mysterious annihilations or divine EXPLOSIONS (where thousands of people died) were set to go off!

Some “mighty wind” or force UP THERE answered a small child’s prayer. The small child realized how evil the New Roman Empire truly was and its total stranglehold on good, kind and gentle human beings in the 21st Century. The small child cried into the universe for help so that something was done or could be done, rather than the continuation of cosmic apathy in regard to the present problems on dystopia Earth. The child’s great request was answered in a real and dramatic sense. As events eventually unfolded, the 4 explosions only occurred in other timelines or realities.

Four ‘time bombs’ were established in the atmosphere directly linked to the most evil war-financiers, mind-bending bankers and above the four darkest corruptions on Earth. The positive plan was to use the (relatively recent) negative oscillations of the planet itself and build an ever-increasing, electro-magnetic charge or BOMB, which grew larger and larger in time, until…

Pretty Spirals in the sky were supposed to have concentrated and collapsed in on themselves precisely three years and 12 days later with EM big bangs!

Before that, the constant ‘sky-events’ would have been taken for granted and almost forgotten in our minds, year after year. White Spirals and blue Streaks would have been (and were in other timelines) misunderstood as the public were informed of any and every explanation except the real ones. Jokes to religions were generated over time because of the Spirals and Streaks. Few looked closer and examined what they actually pointed at and asked: WHY?

Some believed it was “just nature” or federally faked and ‘false-flagged,’ a part of ‘Project Blue beam.’ The four electro-magnetic events or “Aurora Bluealis” only became high-powered EM problems near “end times” as the Heavenly time bombs or prayers reached the critical detonation-point on December 21, 2012.

The small child was then shown the future or the final result from his prayers (good intentioned as they were). In reality, the boy’s request for peace was unnecessary and actually very, very wrong! Even the small child agreed in the last moments and took back the prayers…

It was all different now. The 4 planned ‘cornerstone’ destructions on Earth in 2012 did not occur. What was initiated by the 33-minute ‘Norwegian Spiral,’ was changed in mid time-stream in most of the realities. A bright and glorious Tomorrow had become a little further away in time as it should have been.

Four annihilations of the Secret Industrial Complex or ‘Magic Temple of War-Makers’ would have been misunderstood for ages to come. Media minions and history-perverted (Darwinian) puppets would have waged such campaigns of sorrow and regret for the end of their precious and evil Roman Empire cornerstones of occult fascism. The means and machines of WAR, nuclear wars, future wars, suppression, hatred, violence, dystopia and all the social problems of the masses were eliminated by the…‘thunder of the gods’ in the form of four lightning bolts from Zeus thrown at the Heart of the Beast.

Yet, the godly effort was shown to be in vain and in error to the Child of Tomorrow. The ‘meek’ had truly inherited the world in the aftermath, but refused to believe it…and it didn’t happen. Poor people would have been corrupted again. They would have been instructed to recreate an even bigger and better, Roman Empire from the ashes all over again. Therefore, the ‘good plan’ of destroying tyranny at its source (like Tesla) was the right move at the wrong time…and to the wrong society.

Everything in its own time. The world will work well as it once did when our human hearts are ready to positively change and not before~

How to order novels by TS Caladan 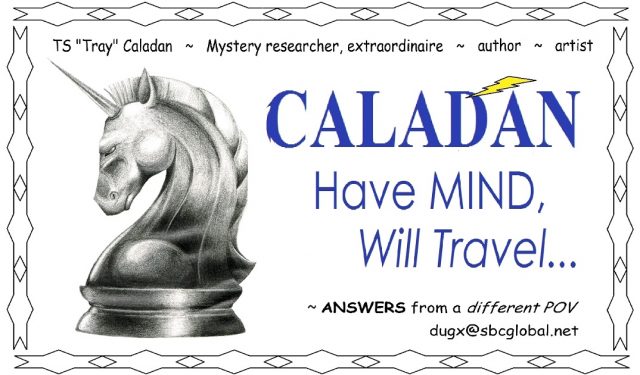