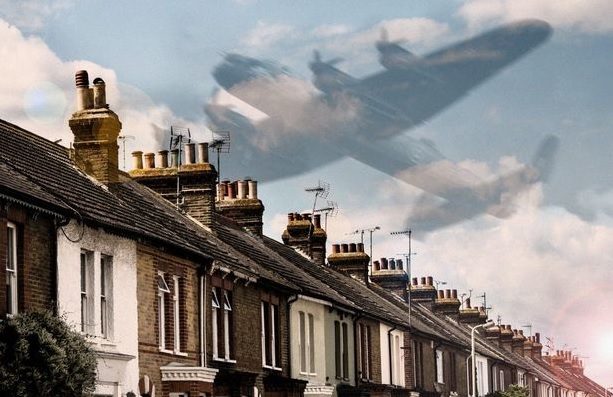 Some really bizarre stuff here. Some are saying our timelines could be getting messed up and crossing events from the past with our present, could this “Cern Is Changing Our Timelines – Proof MANDELA EFFECT” be the cause of this weird event?

Separate reports of a mysterious ghost plane have emerged in Derbyshire where witnesses have seen a dark, silent shape’ sweep across the sky.

Onlookers have stated they have seen a dark shape in the sky at around 6.45pm on Monday night at different locations across the county.

Mark O’Brien believes he saw a quiet, low-flying plane fly above him after picking his daughter up from her swimming lesson in Ripley.

He said: “It was so low, it must have been only been around two or three houses high. I thought it was going to crash at one point but it was large and very quiet.

“I remember it flying above me and my heart stopping for a second. It looked like an old World War Two plane but it was dark so I couldn’t make it out.

“I panicked because I thought it was coming down on the houses near Ashford Rise which is near my house. There was no noise or smoke. It just flew off and disappeared between some nearby trees.

“I came into work today and told my colleagues about what had happened, thinking they would expect me to be crazy.

“But one of them said they had saw the plane as well fly around Heage. It’s so weird really but I know quite a lot of people have seen them before”.

Lyndsey Taylor, of Barnsley, claims to have seen two ghost planes at the same time as Mr O’Brien, only this time near the village of Hope, in the Derbyshire Peak District.

She said: “The whole thing was really weird, we were driving towards Bamcroft when the radio suddenly lost all signal and the sky just went really dark.

“All of a sudden this huge old aeroplane flew straight over our heads, completely silent and was heading for the ground.

“My partner and daughter both saw the same thing. We thought it was going to crash, but then it just disappeared.

“Seconds later we saw what looked like the same aircraft, this time to our left, and it banked over on its side and looked as though it was going to crash before disappearing.

“There is no way a real plane could have had the speed or the height to pull out of it, but we heard no crash at all.

“The plane looked really old with propellers and was green.

“The whole thing lasted a couple of seconds and before we knew it, it was all over and it had got brighter again.

“I don’t know if there is such a thing as a ghost plane, but I cant think what else it can be.”

Pam Orridge said the news of the new sightings prompted her to remember a sighting from a few years ago.

She said: “My son and I were driving along the A6 towards Rowsley from Darley Dale.

“We had just passed Church Road on our left and well before Arconic Forgings and Extrusion also on the left.

“Suddenly in front of us was an aircraft flying very low towards us.

“So low we thought it would crash into us but then it banked sideways and disappeared.

“We could not identify the aircraft other than it was old because it happened so quickly and left us quite shocked.”