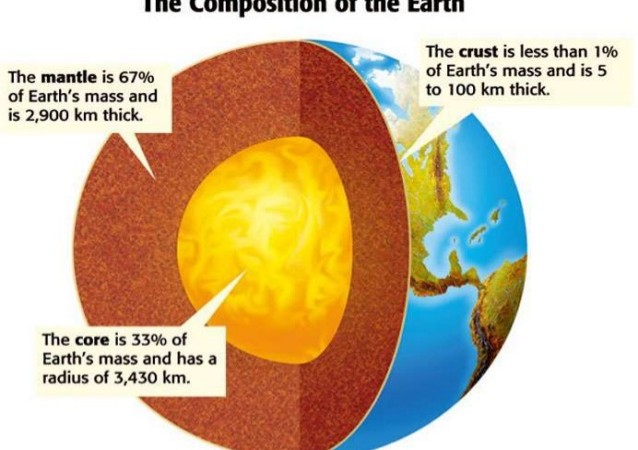 The southeastern United States has been hit by a series of strange unexplained quakes – most recently, the 2011 magnitude-5.8 earthquake near Mineral, Virginia that shook the nation’s capital.

Researchers have been baffled, believing the areas should be relatively quiet in terms of seismic activity, as it is located in the interior of the North American Plate, far away from plate boundaries where earthquakes usually occur.

Now, they believe the quakes could be caused by pieces of the Earth’s mantle breaking off and sinking into the planet.

Scroll down for video 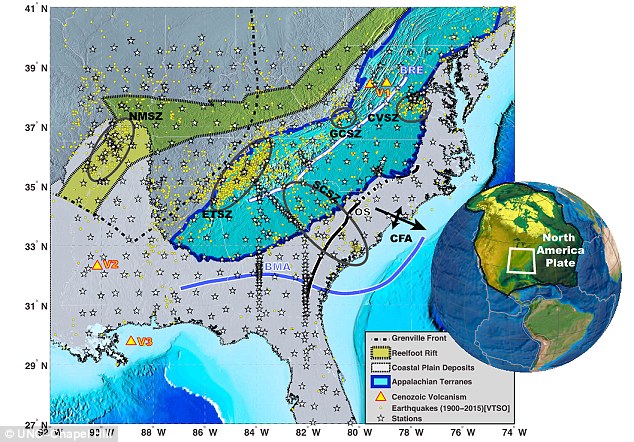 Researchers believe the quakes could be caused by pieces of the Earth’s mantle breaking off and sinking into the planet in the affected area (shown here). They say pieces of the mantle have most likely been breaking off from underneath the plate since at least 65 million years ago. This map shows the study area in detail.

A new study found pieces of the mantle under this region have been periodically breaking off and sinking down into the Earth.

This thins and weakens the remaining plate, making it more prone to slipping that causes earthquakes.

The study authors conclude this process is ongoing and likely to produce more earthquakes in the future.

‘Our idea supports the view that this seismicity will continue due to unbalanced stresses in the plate,’ said Berk Biryol, a seismologist at the University of North Carolina at Chapel Hill and lead author of the new study.

‘The [seismic] zones that are active will continue to be active for some time.’

The study was published in the Journal of Geophysical Research – Solid Earth, a journal of the American Geophysical Union.

‘Based on distinct variations in the geometry and thickness of the lithospheric mantle and foundered lithosphere, we propose that piecemeal delamination has occurred beneath the region throughout the Cenozoic, removing a significant amount of reworked/deformed mantle lithosphere,’ the team wrote.

Compared to earthquakes near plate boundaries, earthquakes in the middle of plates are not well understood and the hazards they pose are difficult to quantify.

The new findings could help scientists better understand the dangers these earthquakes present.

Today, the southeastern U.S. is more than 1,056 miles from the nearest edge of the North American Plate, which covers all of North America, Greenland and parts of the Atlantic and Arctic oceans.

But the region was built over the past billion years by periods of accretion, when new material is added to a plate, and rifting, when plates split apart.

Researchers initially suspected ancient fault lines or pieces of old plates extending deep in the mantle following episodes of accretion and rifting could be responsible for earthquakes in the area.

‘This region has not been active for a long time,’ Biryol said.

‘We were intrigued by what was going on and how we can link these activities to structures in deeper parts of the Earth.’

‘This was an interesting finding because everybody thought that this is a stable region, and we would expect regular plate thickness,’ Biryol said.

At first, they thought the thick, old rocks could be remnants of ancient tectonic plates. 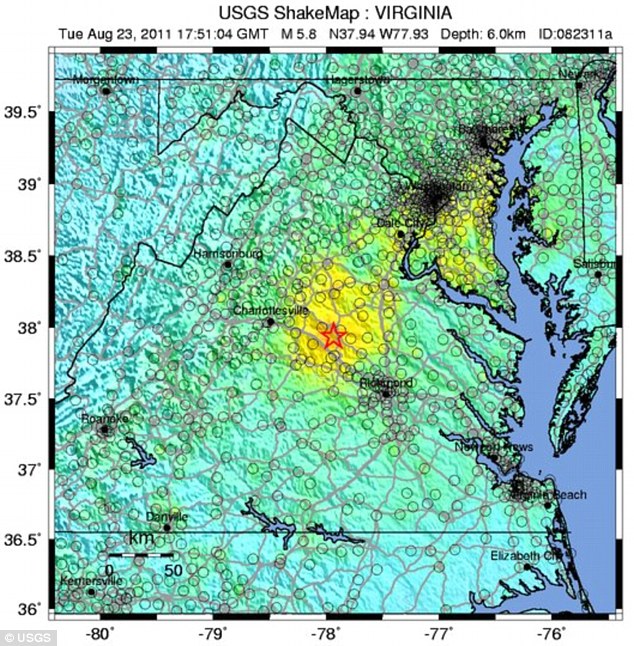 Shaking from the magnitude 5.8 earthquake near Mineral, Virginia on August 23, 2011 was felt by more people than any other earthquake in U.S. history, according to the U.S. Geological Survey. Researchers now believe the quakes could be caused by pieces of the Earth’s mantle breaking off and sinking into the planet.

But the shapes and locations of the thick and thin regions suggested a different explanation: through past rifting and accretion, areas of the North American Plate have become more dense and were pulled downward into the mantle through gravity.

At certain times, the densest parts broke off from the plate and sank into the warm asthenosphere below.

The asthenosphere, being lighter and more buoyant, surged in to fill the void created by the missing pieces of mantle, eventually cooling to become the thin, young rock in the images.

The researchers concluded this process is likely what causes earthquakes in this otherwise stable region: when the pieces of the mantle break off, the plate above them becomes thinner and more prone to slip along ancient fault lines.

Typically, the thicker the plate, the stronger it is, and the less likely to produce earthquakes.

According to Biryol, pieces of the mantle have most likely been breaking off from underneath the plate since at least 65 million years ago.

Because the researchers found fragments of hard rocks at shallow depths, this process is still ongoing and likely to continue into the future, potentially leading to more earthquakes in the region, he said.

YOU MIGHT ALSO BE INTERESTED IN: Mega Quake Could be on the Way After Recent Rash of Large Earthquakes Around the World, Warns Top Scientist