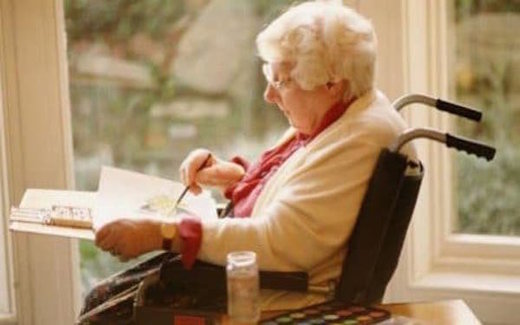 People should aim to stand up every 20 minutes, according to Age UK

Elderly people who spend most of their time sitting down age significantly quicker than more active contemporaries, according to new research.

A study of 1,500 pensioners found those who kept to a sedentary position for ten hours or more a day and who did less than 40 minutes moderate physical activity had the bodies of people eight years older.

They were discovered to have shorter telomeres, the tiny caps found on the ends of strands of DNA which protect chromosomes and which are associated with faster ageing.

Experts have said the research represents a “wake-up call” for Britain’s growing elderly population and that pensioners should aim to stand up and walk around every 20 minutes if they can.

“People don’t realise that if you sit down all day it can undermine all the exercise you do,” said Professor James Goodwin, head of research at Age UK.

Current Government advice recommends 150 minutes of moderate aerobic exercise a week for older people, however this latest research suggests the benefits from that amount of activity can be easily undone by a sedentary lifestyle.

Published in the American Journal of Epidemiology, the study describes how participants aged between 64 and 95 wore devices on their right hip nonstop for seven days to record their movements; they subsequently completed a questionnaire.

“Our study found cells age faster with a sedentary lifestyle,” said Dr Aladdin Shadyab, the lead author from the University of California.

“Discussions about the benefits of exercise should start when we are young, and physical activity should continue to be part of our daily lives as we get older, even at 80 years old.”

As cells age, their telomeres naturally shorten and fray, but health and lifestyle factors, such as obesity and smoking, are believed to accelerate the process.

“If you’re sitting down for prolonged period of time, getting out of your seat every 20 minutes and walking about for 2 or 3 minutes is probably very advantageous,” said Professor Goodwin.

“It could make a big difference to your long term health, to your risk of chronic illnesses and could help to slow down the rate of ageing in your body.”

Previous research has indicated that prolonged sitting could be especially dangerous for women by raising their risk of developing cancer.

A study found that those who spent more than six hours a day sitting down were 10 per cent more likely to develop the disease compared to those who sat for less than three hours.

“With health and social care budgets stretched to the limit, it’s time to end our love affair with the chair and get people moving again,” he said.

“It’s never too late to get active and simple things at home such as carrying the groceries, climbing more stairs and pottering around the garden can play a huge role in staying healthy and independent as we get older.

“But whatever age we are, keeping active is the surest way to look after our physical, mental and social health, adding life to our years and years to our life.”