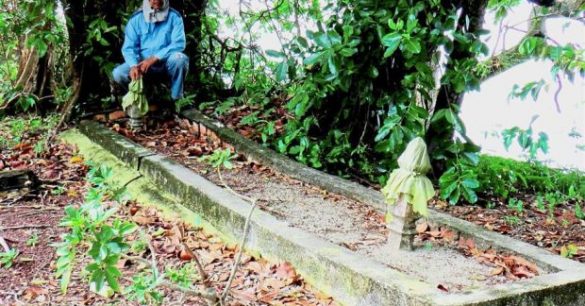 How tall does one have to be in order to be considered a giant and not just “larger that usual”? Would you consider 5 meters (16.4 feet) tall to be giant or larger than usual? We may soon find out after Malaysian media reports the finding of large bones in a cave and extremely long graves outside the cave on Pulau Upeh, an island off of Malacca, a southern state in Peninsular Malaysia.

The graves and bones were reported to have been discovered by Mohd Fuad Khusari M Said, an historian for the Malacca state government who was looking for new historical sites to attract more tourists to the area. If he found a giant, this may make the site the Disney World of Southeast Asia in an area that’s already known as the “Historic State.”

Mohd Fuad claims he discovered the large skeletal remains – reportedly a skull and some bones – partially above the ground inside a cave. Based on their size, he estimated they came from a man who stood anywhere from 3 to 5 meters (9.8 to 16.4 feet) tall. Approximately 1.2 km (.75 mile) from the cave, he found two long graves measuring 5 meters by .5 meters (1.6 feet) wide (tall and thin?). The graves were 15 meters (50 feet) apart and Fuad gave no indication that the bones in the cave were from either of them.

So, you’re probably asking, where are the photographs or videos or at least some drawings? The only photograph with the report was one of Azman Wahab, Fuad’s assistant, squatting at one of the graves. A news video by the reporting site shows the same scene.

Mohd Fuad says he’s a qualified historian with 10 years experience as an archeologist and knows one thing for certain:

I have reported the findings to the authorities because we have no right to excavate the site without permission.

That was confirmed by local chief minister minister Idris Harun, who acknowledged that the bones might be from giants.

We have commissioned the historian to provide facts about undiscovered historical sites and research on the latest discovery of giant-sized remains is ongoing. 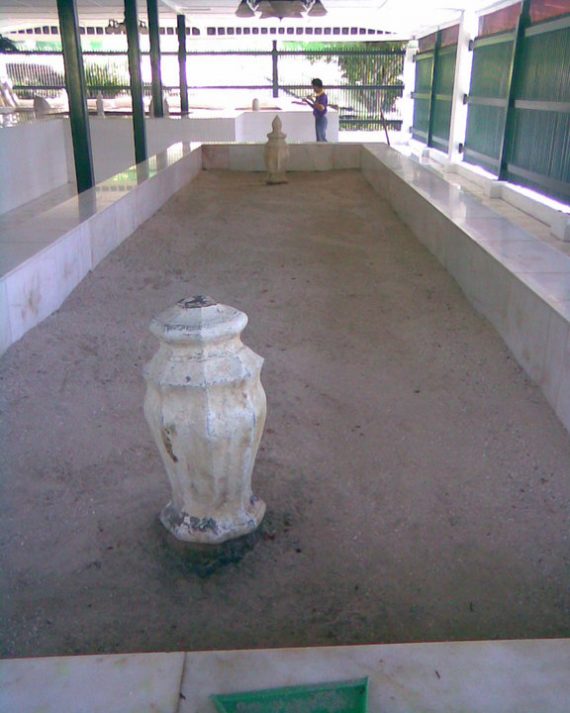 News of giants on Pulau Upeh isn’t shocking to locals because tales of the existence of their bones have been told for years. Some of that comes from the other giant-sized graves on the island, including the tomb of Sultan Al Ariffin Syeikh Ismail – a distant relative of the prophet Muhammad from Baghdad who brought Islam to the island in 1495. Al Ariffin’s grave is a popular tourist site, as are the similar giant tombs of allegedly giant religious leaders from other countries who joined Al Ariffin in spreading Islam. Before you ask the question, here’s the answer from Fuad.

There was no excavation work at any of these grave sites, so the tales of giant settlers remain a myth. But the research on this latest find could prove or disprove claims that giant-sized men roamed Malacca a long time ago.

The discovery of the remains of giants – if it’s true, of course – is a big deal to the Malaysian government. Amir Hamzah Aziz, the social services director of the right-wing Barisan Nasional party – the nation’s largest political party – gives his word:

Many claimed to have sighted the remains there. If it’s true, we must preserve it for the future generation.

News of sixteen-foot giants travels fast. Better start digging and this time, send someone with a camera and the proper paperwork.