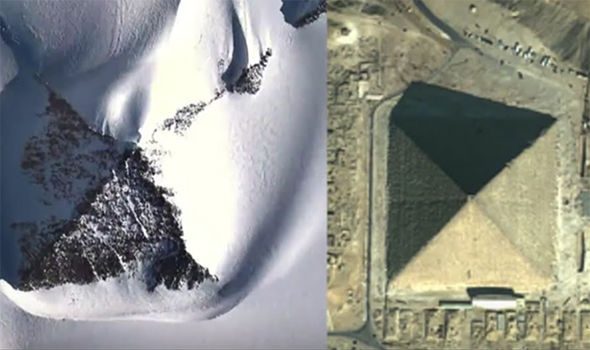 STUNNING images of what appears to be a pyramid in Antarctica are baffling scientists around the world.

Images on Google earth have revealed the existence of the four-sided structure, which bears an uncanny resemblance to the famous Egyptian pyramids built thousands of years ago.

Covered by snow on each side, the find has prompted theories that what is now the snowy caps of the earth was once inhabited by humanity.

Three structures have apparently been found, two roughly 10 miles inland and the other close to the coast.

Evidence from the surrounding area indicates the climate was not as cold as it is today.

The most famous pyramid, Egypt’s Giza, was built around 2500BC

In 2009 scientists studied samples taken from the frozen continent and discovered pollen, suggesting the temperature was much higher than the frosty -49c, around 20c.

Three years later in 2012, scientists from Nevada’s Desert Research Institute identified 32 species of bacteria from Lake Vida, east Antarctica, lending further proof the climate was entirely different to the frozen tundra that it is today. 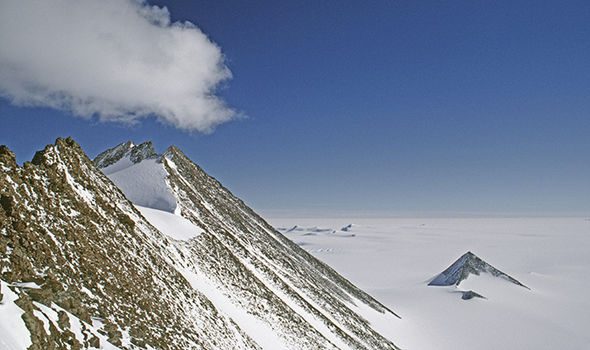 Dr Vanessa Bowman previously said: “Go back 100 million years ago and Antarctica was covered in lush rainforests similar to those that exist in New Zealand today.”

As climate change continues to transform global environments, historical spots around the globe also suggest a very different temperature and eco-system thousands and millions of years ago, further proof that Antarctica could have been a lush, tropical land.

Experts theorise a civilisation similar to what existed in Africa, Asia and Europe lived there.

And if the structures prove to be man-made, the discovery could alter human history as we know it.

The most famous pyramid, Egypt’s Giza, was built around 2500BC and is considered one of the seven wonders of the ancient world.

Its construction has baffled experts for centuries, with slave labour touted as one explanation alongside a complex system of pulls and levies with a workforce of tens of thousands.

Some more avant garde suggestions point towards extra-terrestrial help, buoyed by the location of the pyramid in relation to the magnetic north pole and its alignment with the sun during the summer solstice, something considered beyond the capabilities of the Egyptians.

For the Antarctic pyramid, while extra-terrestrial help is also among theories, another explanation is it could be a natural phenomenon known as nunatak, which is mountain peaks which jut up just above massive glaciers.