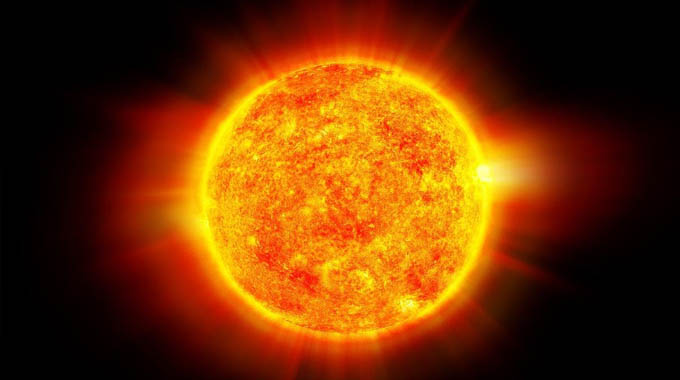 By Dr.Tony Phillips
via Space Weather

Something big may be about to happen on the sun. “We call it the Termination Event,” says Scott McIntosh, a solar physicist at the National Center for Atmospheric Research (NCAR), “and it’s very, very close to happening.”

If you’ve never heard of the Termination Event, you’re not alone. Many researchers have never heard of it either. It’s a relatively new idea in solar physics championed by McIntosh and colleague Bob Leamon of the University of Maryland – Baltimore County. According to the two scientists, vast bands of magnetism are drifting across the surface of the sun. When oppositely-charged bands collide at the equator, they annihilate (or “terminate”). There’s no explosion; this is magnetism, not anti-matter. Nevertheless, the Termination Event is a big deal. It can kickstart the next solar cycle into a higher gear.

Above: Oppositely charged magnetic bands (red and blue) march toward the sun’s equator where they annihilate one another, kickstarting the next solar cycle. [full caption]

“If the Terminator Event happens soon, as we expect, new Solar Cycle 25 could have a magnitude that rivals the top few since record-keeping began,” says McIntosh.

This is, to say the least, controversial. Most solar physicists believe that Solar Cycle 25 will be weak, akin to the anemic Solar Cycle 24 which barely peaked back in 2012-2013. Orthodox models of the sun’s inner magnetic dynamo favor a weak cycle and do not even include the concept of “terminators.”

“What can I say?” laughs McIntosh. “We’re heretics!”

The researchers outlined their reasoning in a December 2020 paper in the research journal Solar Physics. Looking back over 270 years of sunspot data, they found that Terminator Events divide one solar cycle from the next, happening approximately every 11 years. Emphasis on approximately. The interval between terminators ranges from 10 to 15 years, and this is key to predicting the solar cycle.

Above: The official forecast for Solar Cycle 25 (red) is weak; McIntosh and Leamon believe it will be more like the strongest solar cycles of the past.

Example: Sunspot Cycle 4 began with a terminator in 1786 and ended with a terminator in 1801, an unprecedented 15 years later. The following cycle, 5, was incredibly weak with a peak amplitude of just 82 sunspots. That cycle would become known as the beginning of the “Dalton” Grand Minimum.

Solar Cycle 25 is shaping up to be the opposite. Instead of a long interval, it appears to be coming on the heels of a very short one, only 10 years since the Terminator Event that began Solar Cycle 24. Previous solar cycles with such short intervals have been among the strongest in recorded history.

These ideas may be controversial, but they have a virtue that all scientists can appreciate: They’re testable. If the Termination Event happens soon and Solar Cycle 25 skyrockets, the “heretics” may be on to something. Stay tuned for updates.