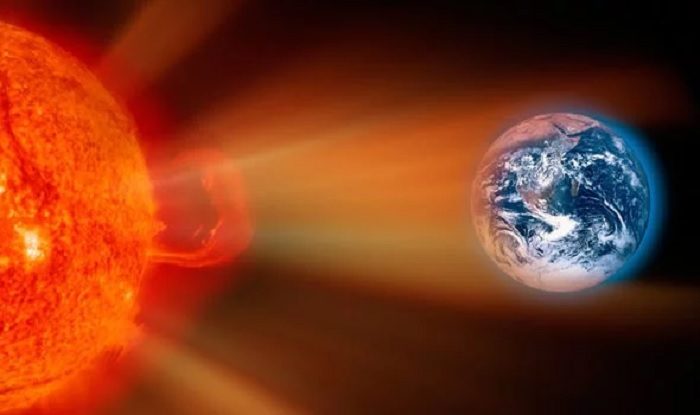 A SOLAR storm is expected to close out the Easter weekend with a bombardment of solar particles set to hit our planet on Easter Monday.

Researchers have noticed a small hole on the outer layer of the Sun’s atmosphere – known as a sunspot – which is turning towards Earth. Sunspots are patches of darkness on the Sun which are caused by underlying magnetism beneath the surface. However, sometimes that magnetism bubbles up and is released in the form of solar flares, which spew cosmic particles into space.

Holes like this are common, and researchers say we are now in the midst of the outpouring of solar particles, which will continue to collide with Earth on Easter Monday, April 22.

The clash of our planet and the winds is likely to cause stunning northern lights.

Cosmic forecasting website Space Weather said: “A minor hole in the sun’s atmosphere is turning toward Earth and spewing a stream of solar wind in our direction.

As the magnetosphere gets bombarded by solar winds, stunning blue lights can appear as that layer of the atmosphere deflects the particles.

For the most part, the Earth’s magnetic field protects humans from the barrage of radiation which comes from sunspots, but solar storms can affect satellite-based technology.

Solar winds can heat the Earth’s outer atmosphere, causing it to expand.

This can affect satellites in orbit, potentially leading to a lack of GPS navigation, mobile phone signal and satellite TV such as Sky.

Additionally, a surge of particles can lead to high currents in the magnetosphere, which can lead to higher than normal electricity in power lines, resulting in electrical transformers and power stations blow outs and a loss of power.