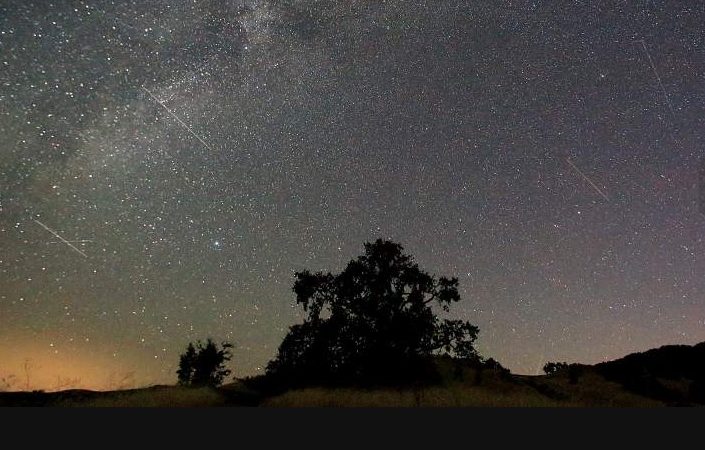 People all over Sonoma County looked up at about 7:40 p.m. on Thursday, Nov. 21, when a brief series of “booms” rolled across the valleys. But there was no glow in the sky, the stars were visible in the cloudless sky. Was it thunder?

Or was it a meteor?

It may be no coincidence that the sound corresponded to a large but infrequent meteor shower, known as the Unicorn (or Monocerotids, from the constellation of its visible origin), seen only every 25 years or so – and last reported in 1995. But meteors are usually silent apparitions, fleeting and ghostly.

In social media groups, many people dialoged about the Thursday night noises. Descriptions of the noises ranged from “rumbles like thunder” to “like a limb fell on the house.”

And it didn’t seem to be particularly localized, but strong throughout the Sonoma Valley, in Nextdoor neighborhoods from Temelec to Denmark Street. Similar social media networks reported the noises at about the same time in Healdsburg, 25 miles away. Others on Facebook said it was heard in Sebastopol, Santa Rosa, Cloverdale, Petaluma, Napa and Marin.

More than once on Facebook, a Patch article titled “Meteor the Size of a Car Hits Bay Area” was posted as an answer, despite its Oct. 18, 2012 date. It describes a large meteor that was “seen and heard throughout the Bay Area,” complete with a photograph of the fireball.

But not only were there no lights signaling the source of the noise, there were few reports of rumbling or earthquake-like movement. The Berkeley Seismology Lab’s earthquake map showed no detectable shaking at that time, even in the often-nervous Geyser Peak area.

Local law enforcement said they heard about the noises, but there were no official reports to them. “Typically when we hear about loud booms, we think about the ag community around the vineyards, but harvest is pretty much over by now,” said Sgt. Michael Baraz of the Sonoma Police Department.

“We only had a few calls regarding loud booms,” said Sgt. Juan Valencia of the Sonoma County Sheriff, saying the calls arrived around 8 p.m. “The rumor on social media was meteor storm.” Two SCSO reports at 19:50 and 19:51 – around 7:50 pm. – were reported as “promiscuous shooting.”

While a sonic boom caused a meteor is unlikely, it’s not impossible. Perhaps the meteor had already fallen, and its fleeting appearance had gone unnoticed – then the sound arrived many seconds, even minutes later.

“Meteors are able to create sound waves,” writes Alastair Gunn, a radio astronomer at the University of Manchester, on the Science Focus website. “As they tear their way through the atmosphere they can create a sonic boom in the same way a fast-moving aeroplane does.”

If it were a meteor, it’s possible the sound many not reach the surface “until many minutes after the meteor appeared,” Gunn wrote, and given the fleeting nature of a high-altitude meteor it’s quite possible the two were not synchronous.

“Ground width of the boom exposure area is approximately one mile for each 1,000 feet of altitude; that is, an aircraft flying supersonic at 30,000 feet will create a lateral boom spread of about 30 miles,” according to the U.S. Air Force’s sonic boom fact sheet.

“Depending on the aircraft’s altitude, sonic booms reach the ground two to 60 seconds after flyover,” the report continues. But not all booms are heard at ground level due to factors of temperature and altitude – the higher the source of the supersonic sound, the more likely it is to be refracted, or bounced upward, by the thick atmosphere closer to the surface.