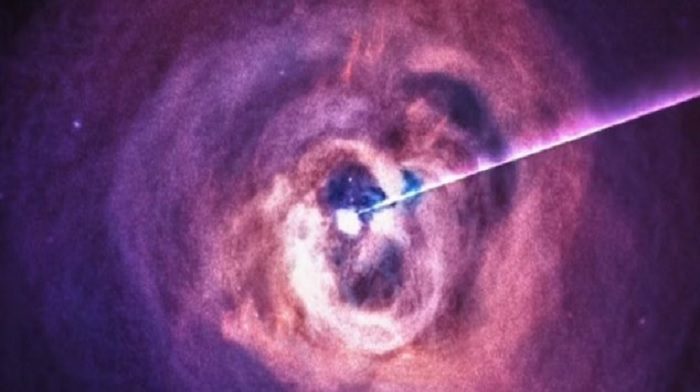 “The resulting audio is undeniably creepy…”

via unexplained-mysteries
Image caption/credit: The cluster is situated 250 million light years away/ NASA

The newly released clip is a processed recording of sound waves rippling through clouds of gas and plasma.

The iconic tagline from the movie ‘Alien’ states – “in space, no-one can hear you scream” – and in the vacuum of space this is correct, but it’s important to remember that not all of space is a vacuum.

A couple of days ago, NASA released an audio clip of some very strange sounds that were recorded rippling through the gas and plasma surrounding a black hole in the distant Perseus galaxy cluster.

Situated 250 million light years away, this distant region of space was imaged by NASA’s Chandra X-ray Observatory all the way back in 2003, but now thanks to new sonification techniques which have brought the sounds into the range of human hearing, it is possible to listen to them for the first time.

The resulting audio is undeniably creepy – a sort of otherworldly moaning, mumbling noise.

“In some ways, this sonification is unlike any other done before… because it revisits the actual sound waves discovered in data from NASA’s Chandra X-ray Observatory,” NASA wrote.

“In this new sonification of Perseus, the sound waves astronomers previously identified were extracted and made audible for the first time.”

You can listen to the audio for yourself below.

The misconception that there is no sound in space originates because most space is a ~vacuum, providing no way for sound waves to travel. A galaxy cluster has so much gas that we've picked up actual sound. Here it's amplified, and mixed with other data, to hear a black hole! pic.twitter.com/RobcZs7F9e