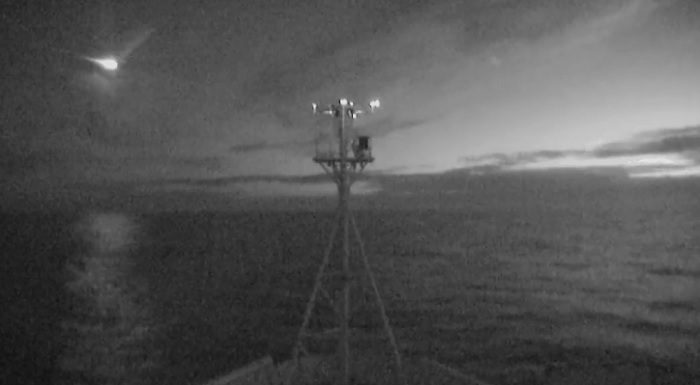 An enormous, spectacular fireball blazing a trail across the sky off the southern coast of Tasmania, Australia, has been captured on film.

A livestream camera fitted to the research vessel Investigator, operated by Australia’s national science agency CSIRO, spotted the fireball at 9:21 p.m. local time on Nov. 18. The vessel is designed to “look” down, performing mapping of the seafloor and conducting oceanographic studies about 60 miles south of Australia, but it was the meteor that flew by overhead that excited the crew on Wednesday.

“What we saw on reviewing the livestream footage astounded us, the size and brightness of the meteor was incredible,” John Hooper, voyage manager onboard the vessel, said in a press release.

The local media was “flooded with reports of sightings,” but no additional photos or vision have turned up at this stage, according to CSIRO. The International Meteor Organization, which tracks meteors, doesn’t contain any reports of the fireball over the ocean. The research vessel investigator seems to have had the only good view of the burning rock as it made its death dive, with chunks likely to have fallen into the sea.

“We were very fortunate that we captured it all on the ship livestream,” Hooper said.

You can catch a glimpse of the fireball above and find the full video here.

Meteors are giant chunks of rocks that are known to put on quite a show when they collide with the Earth’s atmosphere. In July, a fireball exploded over the skies of Tokyo with the force of 165 tons of TNT — enough to create a sonic boom.

And while you may have missed out on seeing those rocks clangin’ and bangin’ into the Earth, you can catch the Leonid meteor shower right now, which will remain active until Monday, Nov. 30. Plenty of chances to catch the stunning celestial events.