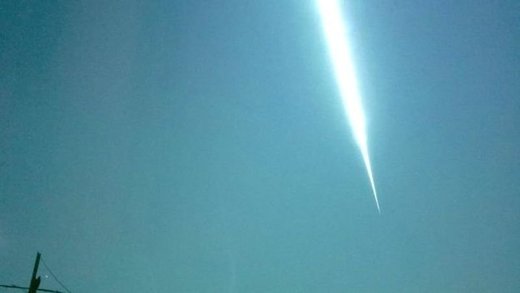 The passage of a spectacular fireball widely observed across the British Isles just before 3:17am GMT on Thursday, 17 March was also recorded by the UK Meteor Observation Network’s camera at the Clanfield Observatory in Church Crookham, Hampshire.

According to Richard Kacerek of UKMON, the camera was facing northwest and the fireball traversed from west to north. The northeast-facing camera did not record it, but it did register a ‘white out’ at the same time.

The demise of the brilliant meteor in a green flash and a pure-white trail was also recorded by the car dashcam of Paul Gilbert whilst driving in Battersea, London and posted on Twitter.

Chris Cameron-Wilton captured the meteor from North Wales on his weather station camera looking South-South-East from his house.

Reports have come from the West Midlands, Hampshire, London and the east coast of England, but many more are making their observations known. Did you see or photograph it? If so, please tell us about your experience.

IF YOU ENJOY THIS SITE PLEASE TELL OTHERS ABOUT US…SHARING IS CARING
HAVE A COMMENT? LEAVE YOUR COMMENT BELOW
source,source