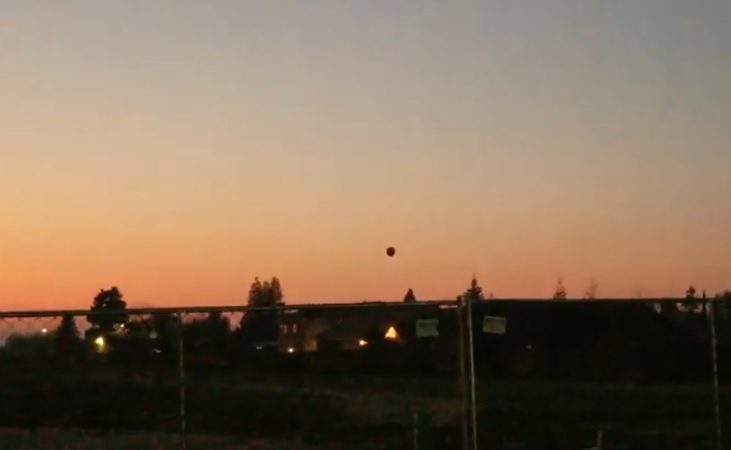 Spherical UFO Recorded Floating in the Sky over California

A video clip was recently uploaded showing what appears to be a spherical object motionless in the sky.

It was recorded by YouTube user ‘jusdafide’ who saw the bizarre spectacle during an evening stroll through Tulare County on February 2nd.

“That is strange,” he said. “That is so strange. That is really weird, there is, like, no strings or anything on it. It’s just floating, I don’t know what the heck… it’s a perfect circle.”

Mysteriously the object seems to be suspended in the air while being motionless, despite not being attached to anything.

Things get even stranger…

“22 minutes after the first video I walked closer to the suburbs to see if I could get a closer video of whatever it was. The object floated over the homes of my neighbors and moved a few times but stayed floating over a few houses.

I thought it was a weather balloon at first but no strings were visible and it didn’t move with the wind, as a balloon on a string would. Also, why would a weather balloon or advertisement float over suburban homes? I have no idea what it is.”

Are we looking at something of extraterrestrial origin or perhaps just something with an unexpected earthly explanation?