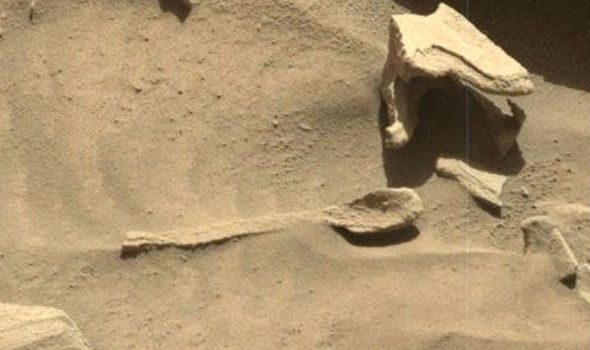 IS this a petrified relic from a lost civilisation that once inhabited Mars, or just an amusing optical illusion?

It depends who you believe.

Alien chasers are convinced it is a dust-coated spoon left by a race that perished on Mars.

There is a growing conspiracy theory begun by US scientist Dr John Brandenburg, that there was intelligent life on the planet that was wiped out by nuclear war.

The “spoon” was found by YouTube channel UFO Hunter in a NASA image taken by the Curiosity Rover droid which explores the surface of Mars.

The channel uploaded a video about it today.

He wrote on ufosightingsdaily.com: “This is a fantastic discovery of an eating utensil near the Mars Curiosity rover.

“The spoon is actually the second spoon to be found on Mars, and this one is an exact duplicate of the earlier discovery…there is almost no difference in the spoons found.

“Also I explored the photo a little bit and found that in the upper left hand corner there was another eating utensil that resembles a spoon but with a triangle end to it. 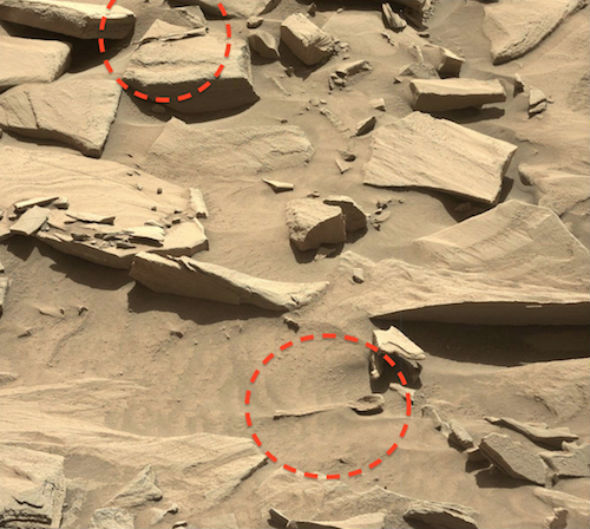 The spoon (circled bottom) as it was seen in the image.

“Now that could also be a stirrer or even a knife if you use the opposite end of it, but its dimensions match the spoon.

“It’s length, width, and thickness all match the spoon.

“This one shows that the beings that used this spoon had hands similar size to our own. That would make them our size, how cool is that?”

The alleged spoon is the latest in a string of alleged earthly objects found by Mr Waring and co in NASA images.

Other items include a shoes, a gun, fossils, various animals, and even ancient ruins.

They claim the discoveries prove there was, or even still is, life on Mars.

But, NASA, and other scientists say they are nothing more than optical illusions and wishful thinking.

NASA says its rovers have yet to find any evidence of even the most simplistic forms of life.

The spoon and other finds, it says, are the results of pareidolia.

This is when the brain tricks they eyes into seeing familiar objects such as faces or animals in textures such as clouds or the surface of rocks like those on Mars.