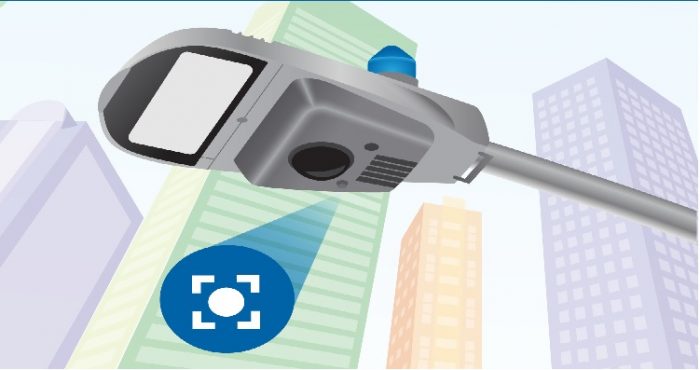 Soon, spying street lights equipped with ShotSpotter microphones will be in every city and town, that’s because GE lighting and ShotSpotter (SST) are working together to spy on everyone.

“We’ve entered an era where lighting is so much more than illumination,” says Rick Freeman, Global Product General Manager, Intelligent Devices, GE Lighting. “The ecosystem we are building with our Intelligent Environments for Cities solution is transforming street lighting into the analytical brain of urban life, and this MOU with ShotSpotter gives one more option for cities to unlock new potential benefits for their city teams and their residents.”

We’ve entered an era where lighting is so much more than illumination? If they’re talking about spying on an entire population, then I guess they’re right. What are the potential benefits to residents? Fear and control are two things that come to mind, more on that below.

We install low-impact LED street lights throughout the municipal grid to help cities improve energy efficiency—and can also equip them with sensors that see, hear and feel the environment around them.

According to GE, soon networked street lights will spy on parking lots and traffic.

Networked LED street lights will have the ability to direct drivers to available spaces with the help of built-in sensors and wireless transceivers. The same street light could serve as a sensor and give warnings in the event of severe weather or other event or help manage traffic and offer residents a faster route home.

Street lights to send real-time alerts to the public

We partner with vendors and developers on software applications that use our data for everything from real-time transit trackers to public safety alerts. Companies like Sensity seen above, use lights equipped with Wi-Fi detectors.

Think about what’s happening, Street lights are being designed to spy on conversations, cell phones, parking lots, traffic and more!

GE lighting and ShotSpotter are creating massive databases on everyone

The above video, reveals what’s really behind SST. At approximately 1:00, their CEO boasts about accumulating data at a MASSIVE rate and MASSIVELY deploying surveillance microphones across entire cities!

Street lights combined with surveillance are designed to be cost-affordable

With ShotSpotter sensors embedded into existing lighting fixtures throughout a city—rather than deploying them on their own mesh network— broader coverage areas will be available on a cost-affordable basis, creating value for emergency responders and communities alike.

What they’re really saying is, by combining street lights with surveillance, cities and towns will save money. This is a nationwide issue, that’s getting worse. DHS and the Department of Justice hand out grant money to private companies, that are turning cities and towns into massive surveillance hubs.

Last week, I warned everyone that the ‘Array of Things collects facial biometrics and license plate information’, combine that with GE, and Shotspotter and a truly frightening picture comes to light. (pun intended)

The only data that will not already be public is a limited set of images used to improve computer vision software. These images will contain no sensitive PII, but some may show faces or license plate numbers. The University of Chicago, as copyright holder of the data, would be responsible for responding to law enforcement requests.

According to SST’s Flex datasheet, police use CCTV cameras and ShotSpotter to spy on entire cities and towns.

Did you catch that? VACCINE is all about ‘command and control’. A DHS run program with an acronym that boasts about controlling the public? It doesn’t get much more brazen than that.

According to a UK Sun article, CCTV’s will allow cops and even private companies to track individual people’s movements.

Eventually, CCTV cameras will be able to work out the identity of the people they are looking at – as long as they have pictures of them.

Soon no place will be safe from Big Brother’s prying ears and eyes!

“The 2014 IACP (International Association of Chiefs of Police) Annual Conference will include the presentation of three VACCINE technologies. This event that takes place in Orlando, Florida from October 25th-28th involves more than 10,000 professionals representing all sectors of law enforcement who are looking for new information, products and services to improve their agency operations.”

The future of everyone’s privacy is at stake. Imagine a future where both street lights and traffic lights are spying on everything we say and everywhere we go?