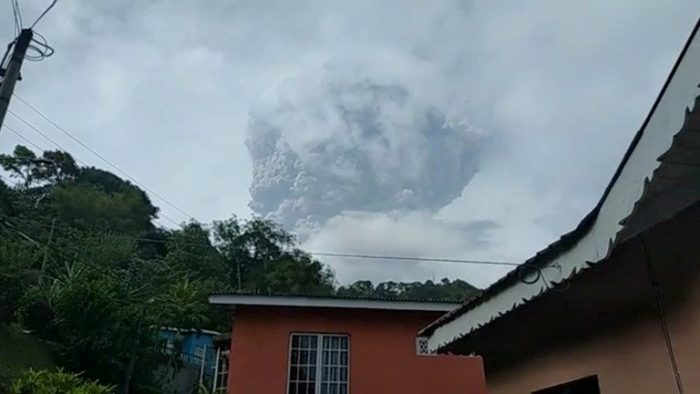 St. Vincent’s La Soufrière volcano continued erupting on Monday with a particularly powerful new blast reported at the site, which sent pyroclastic flows hurtling down its sides on a path of destruction.

No deaths or injuries have been reported following a huge eruption from La Soufrière on Monday morning. The explosion was reportedly much greater than the first eruption on Friday.

Erouscilla Joseph, the director of the University of the West Indies’ Seismic Research Centre, told the Associated Press that “anybody who has not heeded the evacuation needs to get out immediately… It’s destroying everything in its path.”

Monday’s explosion sent ash and gases spewing into the sky, masking the Sun and covering the ground in snow-like volcanic debris.

#STVINCENT: The Office of the Prime Minister has issued an official statement calling for public officers & other employees of the State to report for work today, April 12.
#LaSoufriereeruption #LaSoufrière #Volcano https://t.co/Zib8OdRE84 pic.twitter.com/wwaeyGMZxY

The eruption was also considerable enough to send pyroclastic flows, traveling as fast as 120 miles per hour, down the volcano’s south and south-west flanks.

Just so that you would have an idea, about 2- 3 inches of Ashfall in Troumaca, St. Vincent. This village is located in #LaSoufriere’s ORANGE Hazard Zone

Richard Robertson, a geology professor at the seismic research center, told local station NBC Radio on Monday that the eruption has destroyed the volcano’s old and new dome, creating a new crater. “Anything that was there, man, animal, anything… they are gone,” he said, referring to the pyroclastic flow.

In a tweet on Monday, the country’s National Emergency Management Organization (Nemo) said eruptions “of similar or larger magnitude” were likely to continue for the next few days.

The eruptions over the last three days have forced more than 16,000 people to evacuate their homes, and even the neighboring island of Barbados has been covered in a thick layer of volcanic dust.