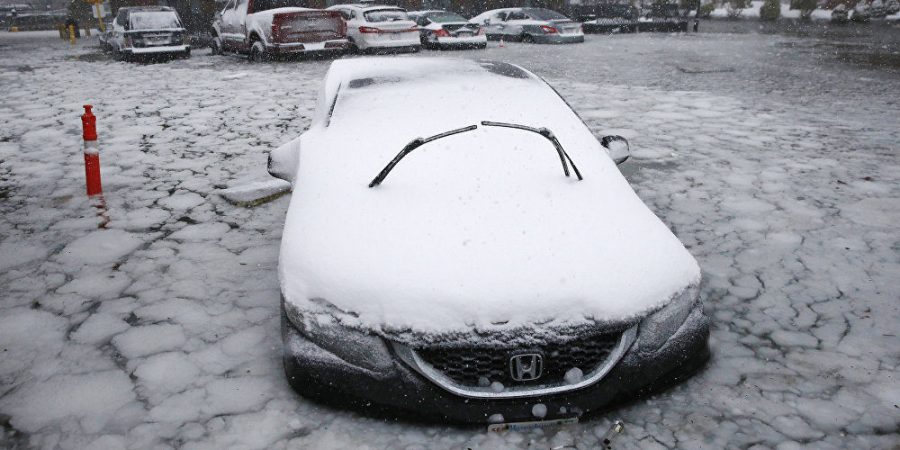 On Thursday, airliners canceled more than 3,600 flights after a major winter storm, the fearsomely termed bomb cyclone, dished out mayhem across the northeastern US, according to FlightAware.com, an online flight tracking service.

More cancellations are expected Friday as the storm lingers in New England.

The satellite imagery of this storm is cray. Are people still saying "cray?" I don't care…. this is cray.#BombCyclone pic.twitter.com/EWazcV5KJZ

​The area that saw the most cancellations was, of course, New York. Sitting in white-out conditions and being pounded by strong winds, John F. Kennedy International Airport began cancelling flights at around 11 a.m. local time before suspending flights completely.

Due to strong winds and whiteout conditions, flights at JFK have been temporarily suspended. Travelers are urged to contact their airline carriers for updates on resumption of service

​LaGuardia Airport, also located in the Empire State, later announced via Twitter that it would join JFK in temporarily suspending its flights.

Due to strong winds and whiteout conditions, flights at JFK have been temporarily suspended. Travelers are urged to contact their airline carriers for updates on resumption of service

​Stranded passengers have been urged by the Port Authority of New York and New Jersey to contact airliners to confirm the status of their flights. It is unclear how long the airports will suspend their services.

​”The issue impacting operations at the moment is the ability to plow snow fast enough,” Sara Orsi, senior marketing manager for FlightAware, told USA Today. “As the storm moves through, de-icing capacity will be a greater concern and will limit operations at airports along the East Coast.”

So, yeah, #BombCyclone seems like a pretty good name for it. pic.twitter.com/l8D6lCF4AP

​With the storm now angling toward Massachusetts, videos are beginning to emerge showing massive flooding along the Boston Harbor.

​Reporters on the scene are describing storm tides from the harbor reaching “historic levels.” Flooding has even reached some of the city’s subway stations, forcing closures.

But the flooding and loads of snow is just the beginning, folks. Parts of the US East Coast are also getting themselves prepared for power outages triggered by high winds. According to CNN meteorologist Dave Hennen, wind gusts along the coast could get as strong as 80 mph.

And that’s not all. Per Hennen, ocean ice could even surf its way inland “thanks to mammoth 13-18 foot waves.”

WHOA! Incredible video of the storm surge that's happening now on the Mass. coast. Evacuations are in place in the area. pic.twitter.com/aPfTEuoOfJ

“Stay away from the coasts,” the National Weather Service in Boston tweeted, as it warned of a “high astronomical tide.”

​”The storm is intense! Expect the unexpected,” it added.

Though the storm is projected to leave the New York area by Thursday evening, forecasters predict the region may see up to 10 inches of snowbefore it does, while the Long Island borough could get roughly 12 inches. Boston, too, is looking ahead to an estimated foot of snow.

This is Banks Street in #Winthrop photo courtesy Cheryl Reilly McSharry …. thinking of all the folks hunkered down along the coast right now. #wcvb #WinterStormGrayson pic.twitter.com/uqfZXbqP1r

The powerful storm began its weather attack on the US southeastern coast Wednesday, pummeling Georgia, South Carolina and even Florida with snow, sleet and freezing rain, before it traveled north Thursday.