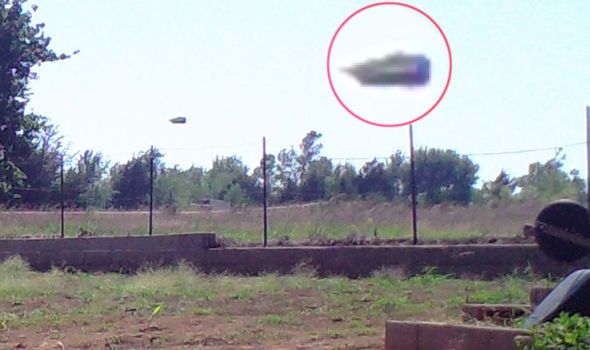 PARANORMAL investigators are looking at claims a robot-like object and a bizarre UFO appeared in separate images taken by a static camera on the same day.

The odd pictures have been sent to the Mutual UFO Network (MUFON) for further analysis after being discovered on Monday.

An unnamed witness, who emailed them to the site, described the first metallic object as having a human-like form, and said it had disappeared by the time the next picture was taken within the same minute.

He wrote in a report to US-based MUFON, which is the world’s biggest organisation dedicated to UFO investigation: “Attached are pictures taken on a Moultrie trail camera. “The wind had been blowing and the camera took lots of pictures.

“I was deleting pictures when this human form caught my eye. This object is less than 200 ft from our house. 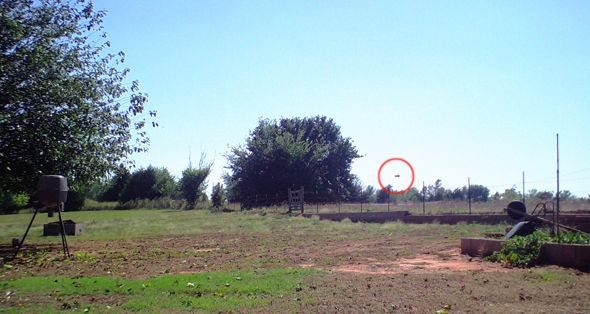 The original image with the UFO highlighted with a ring.

“We have nothing that would look like this thing on the back. I am sending two pictures taken in the same minute.

“The human form is on the right side of picture by the wheelbarrow.”

The object, which looks like it could be part of a larger machine or vehicle, has horizontal lines going up a flat surface.

Also taken by the same camera, some seven hours later, was a picture of the same area, which appears to show a rocket-shaped UFO. 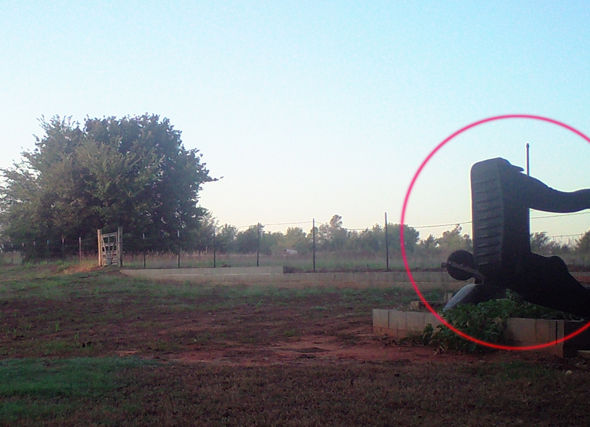 The man who sent the images to MUFON says he has no idea what the ringed image with a ‘humanoid is. 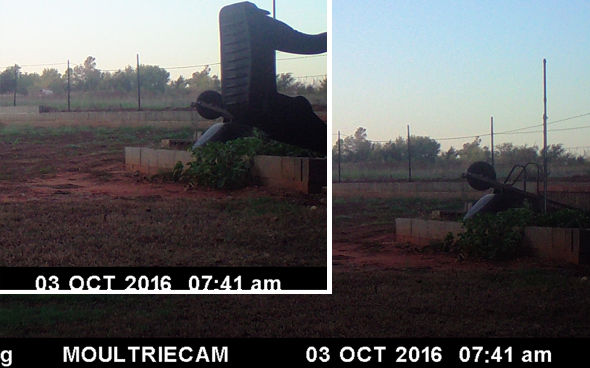 GONE: In an image taken later in the same minute the object has disappeared.

The witness wrote: “Also attached is a picture of an item in the sky too big to be a bird and not the shape of anything I have ever seen in the sky.

“This object was taken about seven hours after the first one.

“It is here again there, and then gone in about the same minute.

“The item in the sky is also to the right maybe 35 degrees it is a black object. I believe the camera is set at 12 mega pixels.

“These were not visually seen my me or my spouse. Only in the pictures.”

Sceptics say birds or insects in flight can often blur in pictures, making them appear bigger and further away than they are, and giving them strange forms, leading to speculation they could be UFOs.

MUFON is investigating the images.