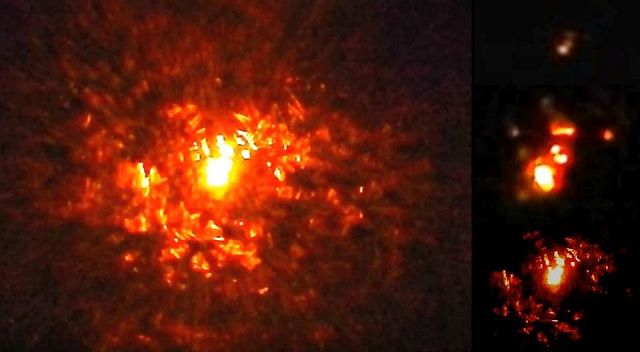 Exceptional images have been captured on camera by Becky Lewis of what appears to match to what NASA identifies as ‘Red Dwarf’ w/exomoons.

A red dwarf star emits extremely powerful cosmic wave which hampers the heliosphere (Sun) and magnetosphere (Earth) and it is said that this leads to current geological upheavals.

But is it really a red dwarf star or it is something what the Hopi’s call the Red Star Kachina?

The Hopi’s have said that the Blue Star Kachina is seen first, and after there will be another sign in heaven which is the Red Star Kachina and will bring the day of purification and on this day the Earth and all life as we know it will change forever.

Whether it is a red dwarf or the Red Star Kachina just consider the recent spate of earthquakes, volcano eruption, extreme weather, heat wave, flooding, landslides, mass animal deaths, plagues, to name a few and all these happening at the same time what is unprecedented because that wasn’t here before.

In the first video Mrmb333 analyses the strange red object. The second original 47 minute video of Becky Lewis shows an in-depth rapport including stunning images of the red dwarf.