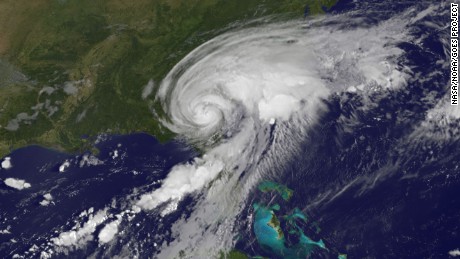 While a super typhoon was wreaking havoc in East Asia, a little tropical storm named Julia formed in Florida on Tuesday night.

Yes, “in” Florida. As in, it formed over land — a very rare occurrence, meteorologically speaking.

The center of the storm was over the city of Jacksonville when it was given tropical storm status late Tuesday night — but that decision caused some controversy.

At 11 p.m., the National Hurricane Center made the decision to name the storm after a small area of tropical storm-force winds was consistently reported for 12 hours.

“Given this persistent organization, the system is classifiable as a tropical cyclone and advisories are being initiated on Tropical Storm Julia, the tenth named storm of the 2016 Atlantic hurricane season,” the center said in its discussion Tuesday night.

Many meteorologists went to Twitter to disagree with the findings. Some even wondered why this storm received a name while the devastating Louisiana floods in August did not meet the criteria for a named storm.

Inland Tropical Storm Julia. I won't comment on #Julia getting a name while the Louisiana no-name system did not. Nope.

How can a tropical storm form over land, rather than over warm ocean water? While Julia’s center was slightly inland, there was plenty of bath-temperature water nearby, which fueled the thunderstorms that formed its core.

Another interesting phenomenon could also be at play: the “brown ocean” effect, in which a tropical cyclone gains enough energy from a saturated Earth to keep a warm core. It’s too early for scientists to know for sure what caused Julia to form over land, but these theories will certainly be researched as a result of this rare formation.

Other TCs have formed over land, but #Julia may be the first to spend zero time over water. #BrownOceanEffect pic.twitter.com/G9bQyKXQyL

The forecast for Julia

Julia is forecast to move slowly to the northeast, and although the winds will remain strong along the coast, very heavy rains will be the main threat. Some areas of coastal South Carolina and Georgia could receive upwards of 10 inches of rainfall in the next couple of days.

Over the next day, the National Hurricane Center expects Julia to become a tropical depression. It will ultimately lose all its tropical characteristics and become a remnant low pressure system.