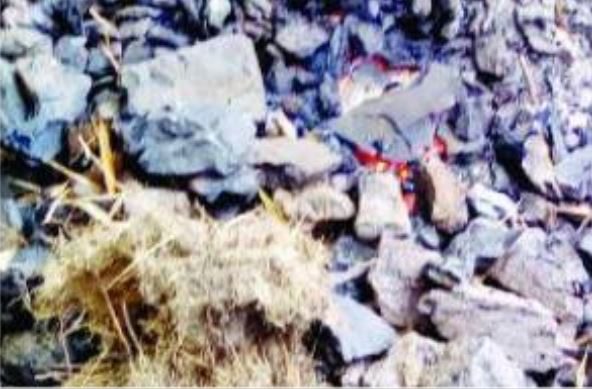 Could this be the Earth opening and releasing methane gases and as a result flames like what is happening in Hawaii. As we know Africa is breaking up so perhaps this might be related.

A stream which used to serve as the main source of drinking water in a community in Nnewi, has reportedly dried up.

The development has caused serious panic in the area because the ground has reportedly begun to emit flames and a strange odor.

The story was first shared by a popular Facebook page, Anambra State Online, which hares only Anambra stories online.
Below is how the story was told:

“Many visitors know Nnewi in Anambra State only as an industrial hub East of the Niger with the Japan of Africa accolade. But there are other natural deposits, even mysteries that make the industrial community a place to visit.

“A recent discovery at Umuzu Mbana village, Otolo, Nnewi, where a waterfall of many centuries that formed a stream at its base called Oduga Stream suddenly dried up, leaving a mystery fire at the bush around in its stead with very offensive odour that has sent the villagers packing. The occurrence has remained a hard nut to crack even by geologists who visited the scene recently. Many of the villagers were said to have relocated to other neighborhoods because of the health hazards the mysterious offensive odour has subjected them to. But others who could not easily relocate are still trapped in the village helplessly.

“The President General of the community, Hon Afam Muodelo told our reporter that before now, the stream was the source of potable water for the villagers. He said the water was the cleanest of all, including boreholes within the environment with no atom of impurity as it came out from the rock.

“He explained that it was always kept clean by the youths every last Saturday of the month as a matter of the village policy which started from their forefathers.

“It was around January 2018 when the villagers began to perceive foul odour all over the place and nobody could fathom what was wrong or the source of the odour. Our youths were dispatched to go and find out what was amiss. And they came back with the information that it was coming from the stream site which dried up some months earlier and people had stopped visiting it. They also came with the information that smokes and fire were coming out from the site,” Hon Muodelo explained.

“He said that when the villagers sighted the fire at the waterfall area they thought it was something they could just contain and had to mobilize the youths to put it out with water.

“But surprisingly, according to him, that was to no avail. He said all the rainfalls so far this year could not quench the bush fire with thick smokes that had been raging with restricted portions in the bush with some stuffs like ceramics around the spots.

“To show how concerned and worried the villagers are, the community leader said the attentions of Anambra State Ministry Health, State Ministry of Environment, State Fire Service, Nnewi Council Area, geologists from Chukwuemeka Odumegwu Ojukwu University and member representing Nnewi North/ Nnewi South and Ekwusigo Federal Constituency at the National Assembly were drawn to the site with no solution at sight.

“He told our reporter that the state health officials advised that every member of the village must begin to take two tins of liquid milk every day, morning and night, as a preventive measure against health hazards the odour oozing from the bush might cause them.

“But the community leader was worried that not every family in the village could afford that on a daily basis. Muodelo said there was no deity at the area of the incident or any sacrilegious thing done there to attract the unusual happenings.

“He called on the Federal and State governments to urgently come to the rescue of the villagers who were exposed to serious health hazards.

“Opinions in the village suggested declaring the residents internally displaced and to evacuate them to a camp until the issues were sorted out to avoid recording casualties.”

Stay updated with the latest Nigerian news from Information Nigeria.