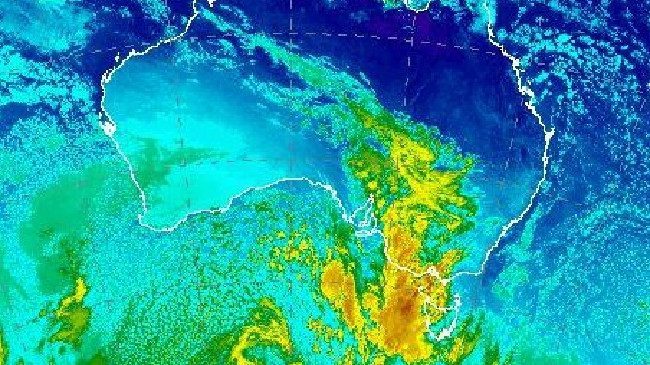 LARGE parts of the nation’s south east are on alert as another severe cold front moves in from the south bringing damaging winds, rain — and more snow.

Severe weather warnings are current for many areas of South Australia, Victoria, NSW and the ACT as the weather system bears down.

Strong winds may reach 50 to 60km/h with gusts of around 90 to 100km/h over western and central parts of South Australia this morning, extending to the South East Tuesday afternoon.

Adelaide can expect a windy day with the very high chance of showers and rain periods. There is also the chance of a thunderstorm.

Further east in Victoria, the weather bureau has issued a severe weather warning for damaging winds for people in the Central, South West, North Central and parts of the East Gippsland, North East, West and South Gippsland and Wimmera Forecast Districts.

Peak gusts of around 90 to 100km/h are forecast on Tuesday over parts of the Wimmera, Southwest, Central and North Central districts. Elevated areas are most at risk.

The risk of damaging winds is expected to extend to Alpine areas of West and South Gippsland, East Gippsland and the Northeast district during Tuesday evening with peak gusts reaching 110km/h.

Melbourne is expecting the wet and windy conditions to develop later this afternoon and evening with damaging winds possible.

In NSW and the ACT, a warning for damaging winds has been issued for people in parts of the South West Slopes, Snowy Mountains and Australian Capital Territory Forecast Districts.

There will be strengthening northwest winds Tuesday evening ahead of a cold front expected to move through the area Wednesday afternoon.

Sydney will miss out on the wild weather with a sunny top of 22C today and 23C tomorrow.

Canberra is heading for a top of 16C with clouds and wind increasing.

The cold front is great news for ski resorts with another 30-40cm expected over the coming days with snow falling to 800m in NSW, VIC and Tasmania.

A beautiful start to the day, winds and cloud are expected to develop into this afternoon. Grab a coffee at Kareela! pic.twitter.com/ceCeMosEdI