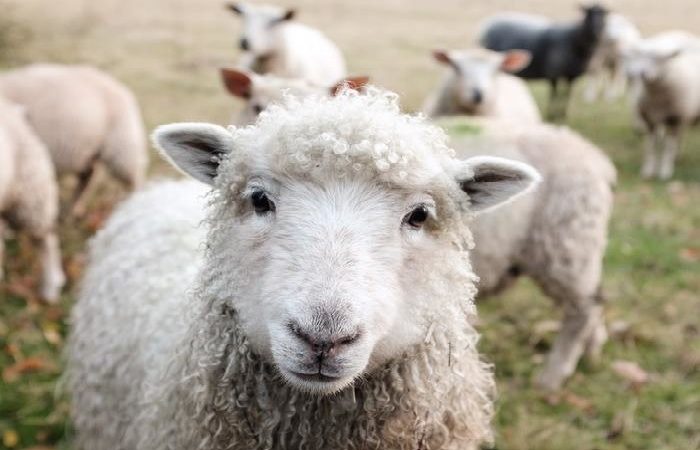 Sheep are awesome (and sometimes funny) intelligent, emotional, social animals that CAN recognize faces of other sheep and now it seems a study confirms they can recognize human faces too. The way these intelligent creatures are treated and horribly kept and killed for food must be changed. Doe the label of ‘dumb animal’ make it easy to justify the horrific things they put them through. Why is it ok for humans to continue to brutalize them in such despicable and evil ways.

A new study is helping scientists understand a deadly human disease, and shows the animals may not blindly follow after all.

When sheep follow people, they may do it a little less blindly than we’ve always thought.

“One of them is just a fan of Jake Gyllenhaal,” lead researcher Jenny Morton said of one of the students who helped select the images. The photos used were somewhat random; they needed to be able to show various faces at different angles, so oft-photographed celebrities made a logical choice.

The research team was interested in seeing whether sheep would be able to discern different faces. Sheep are social animals that live in a flock, and they use a number of methods to communicate. Researchers suspected facial recognition, a complex brain task, might be one of them.

To test this, they trained the sheep to associate the image of one person, Barack Obama for example, with a food reward. They were shown both an image of Obama and another face next to it. When the sheep tapped the former president’s image, it broke an infrared beam and dispensed the treat. Eight times out of ten, the eight sheep in the study knew which face to associate with food.

To truly test that the sheep were recognizing faces and not just familiar photos, the researchers also presented them with different images of each celebrity, including from skewed angles. When shown these different perspectives of each face, the sheep still recognized them more than half the time.

But it wasn’t just the celebrity faces that the sheep recognized. When the image of one of the sheep’s handlers, a frequent treat dispenser outside the experiment, was substituted for a celebrity, seven times out of ten the sheep consistently chose their handler. The study notes in this trial the animals did a “double take” looking at the stranger, then their handler, before finally choosing their handler. The results were published in the journal Royal Society Open Science.

Anecdotally, Morton said she knows the sheep recognize her face. While leading a film crew through the sheep’s university pen early Wednesday morning, Morton saw the animals huddle in a corner away from the strangers. It was only when Morton herself called to them that they approached.

AN ANIMAL APPROACH TO A HUMAN DISEASE
While the study presented an interesting finding about how sheep think, the results lay more foundational research for understanding Huntington’s disease. The rare, yet serious, neurological disorder is irreversible. It impairs a person’s ability to walk, talk, and think. The World Health Organization estimates that between five to seven per 100,000 people are impacted in Western countries (where data is available.)

So far, there’s no cure. If you have the genes, you will probably develop the disease. But Morton says understanding how comparable brain structures function will help researchers develop a cure.

Morton got the idea to study how sheep recognize faces because humans with Huntington’s disease have difficulty recognizing faces. By better understanding sheep brains, medical researchers can use them to test therapies that may eventually be used on people, Morton hopes.

Gene therapy has been suggested as a way to treat the disease-carrying genes in Huntington’s patients. Morton and her team hope to next study a flock of sheep from Australia that have been genetically engineered to carrying Huntington’s disease. By treating these sheep, she theorizes people could one day develop a human treatment.

ETHICS OF THE APPROACH

“I think it’s an extremely interesting and significant study,” said Marc Bekoff, a professor emeritus from the University of Colorado and evolutionary biologist whose book The Animals’ Agenda argues for a more ethical treatment of animals.

“I’m a skeptic on how important these animal models are,” he said. Bekoff cites both an ethical issue in engineering sheep with a degenerative disease and a biological issue in how effective results derived from animal studies can be for human patients.

How effectively studies performed on animals can be transferred to human patients has been a contentious debate for decades. One 2004 study from the FDA found 92 percent of drugs up for approval failed after first passing muster on animals.

“I’m a fan of studying people to learn about people,” Bekoff said.

Morton, however, argued that studying the sheep over time will allow scientists to better understand the cognitive breakdown caused by Huntington’s disease, saying, “This could advance our prospects for getting a therapy.”