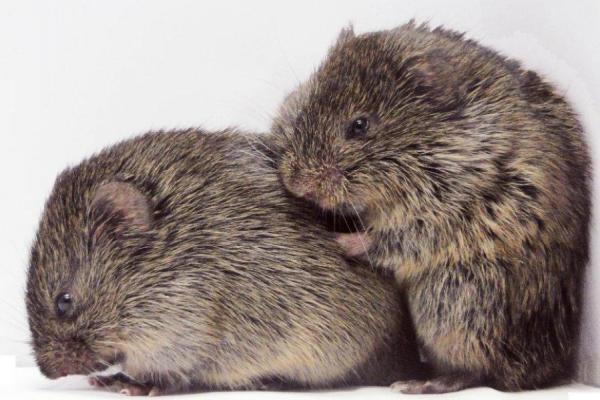 Study: Prairie Voles Console Loved Ones Who Are Stressed

New research shows prairie voles are empathetic little rodents. When their loved ones are stressed, they offer consolation in the form of a good extra-long licking.

Until now, consolation behavior had only been observed among a few non-human species, highly intelligent animals like cats, dogs, dolphins and elephants.

Prairie voles may not be as smart, but scientists say they are rather sociable mammals and are believed to form monogamous pairs, mating for life. Such characteristics make them ideal study subjects for biologists looking for insights into the nature of social bonding.

To see whether prairie voles engage in consolation behavior, researchers at Emory University briefly separated relatives from each other and then watched as they were allowed back together. Half of the time, one of the two voles was subjected brief electric shocks to create heightened stress levels.

When the voles were allowed to rejoin each other, the companions of shocked and stressed voles began licking their relatives more quickly and for longer than they did their unstressed relatives. Grooming appears to be therapeutic for prairie voles.

Hormone levels showed that un-shocked voles became stressed when they weren’t allowed to rejoin and console their shocked relatives.

When scientists repeated the experiment with voles who were not relatives or friendly with each other, but were strangers, they failed to find similar consoling behaviors. Non-relatives still offered grooming, but didn’t alter their licking for stressed strangers.

The new research — published in the journal Science — comes on the heels of another study that showed prairie voles are least stressed when they’re packed into tight quarters and surrounded by their peers.