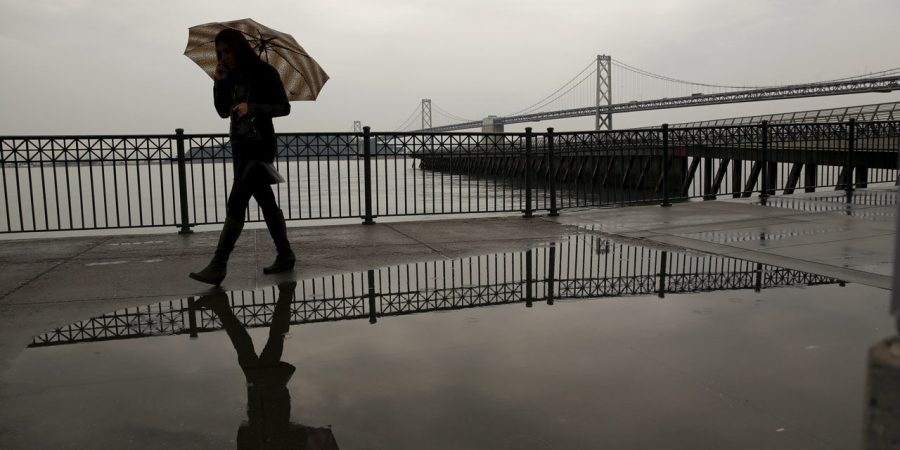 Water shapes California powerfully, deluging the state with El Niño – generated rainfalls and drying it out with punishing droughts. Now, a new study suggests that water may play yet another role: triggering earthquakes.

Scientists for decades have tried to understand how different natural forces, pressing on Earth’s surface, might help explain changes in earthquake rates, with mixed results. The pulsing of the tides has been one long-standing suspect, but their effect is weak or nonexistent. In the Himalayas, rains from the annual monsoon season have also been found to affect quake frequency. And in California, criss-crossed with faults and at the center of grinding tectonic plates, quake activity seems to increase regularly in the autumn along part of the San Andreas fault—during the driest time of year.

To find out whether precipitation was playing a role, geophysicist Christopher Johnson, a recent Ph.D. graduate from the University of California, Berkeley, set out with colleagues to gather data from a network of 661 GPS sensors scattered around the state. The units are sensitive enough to detect when the ground rises or sinks by a few millimeters because of water weight, groundwater pumping, and tides, among other things.

The scientists then teased out how much of those fluctuations came from water being added to or subtracted from Earth’s surface, and calculated how that affected forces deep underground where earthquakes begin, or nucleate. Those force changes were matched with a catalog of nearly 3700 California quakes between 2006 and 2014.

A pattern emerged: of increased quakes in tandem with shifts in water-related stress, suggesting that the seasonal flexing of Earth’s crust, under the loading and unloading of water weight collected in snow packs, lakes, and reservoirs, can trigger certain kinds of earthquakes, the researchers report today in Science.

For some faults, that happens more frequently in late summer, when water levels are lowest and Earth has rebounded from a previously heavy precipitation load. For other types of faults, the rise in small temblors came in spring, when Earth is in the middle of rebounding—as snow melts and runs downstream, Johnson says. For the various types of faults, the difference between the peak quake months and the slowest months is small, varying by roughly 10%.

The findings help show that the duration of the force changes at the surface matter as much as their magnitude, Johnson says. California tidal fluctuations—another potential mover of Earth—bear down on the coast with a force comparable to the seasonal water weight. But those show little effect on quakes in the state. That appears to be because tides change on a 12-hour cycle, rather than a 12-month one, Johnson says.

That offers insights into the way that earthquakes, big and small, are born, says Jean-Philippe Avouac, an earthquake scientist at the California Institute of Technology in Pasadena. “It tells us that the nucleation process is long enough that there is no response to Earth tides. But it is short enough that it can respond to the annual fluctuation of stress,” Avouac says.

Although the findings are intriguing, there’s a risk of overstating the links between water weight and quakes, says John Vidale, a geophysicist at the University of Washington in Seattle who has studied tides and quakes. The findings shed light on how relatively small stresses can influence quakes. But, he says, that won’t necessarily translate into the elusive quest to predict earthquakes. “It’s not like we’re going to suddenly be predicting big earthquakes weeks ahead of time because of this.”