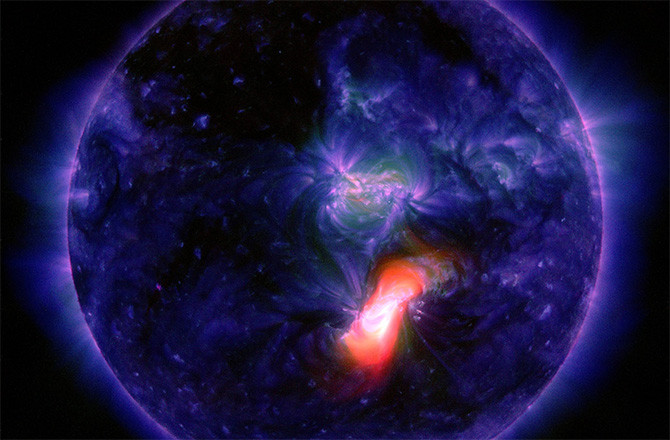 You can say what you like about our nearest star, but as this latest solar eruption proves, it certainly has impeccable timing.

On Monday (Dec. 28), a sunspot cluster erupted, blasting an M-class flare directly at Earth. The extreme-ultraviolet radiation immediately washed over our upper atmosphere, initiating an ionization event that caused a radio blackout over South America, Africa and the south Atlantic Ocean. The blackout may have been detected by mariners and ham radio operators in the 20MHz frequency range, according to SpaceWeather.com.

Although the flare certainly wasn’t of the strength of a major X-class flare (the most powerful class of flare), this event did trigger a significant coronal mass ejection (CME) that is currently racing in the direction of Earth. Space weather forecasters predict a direct hit with Earth’s magnetic field on or around New Year’s Eve, potentially sparking some natural fireworks in the upper atmosphere just in time for 2016.

“Sunspot AR2374 has an unstable ‘beta-gamma’ magnetic field that could explode again in the hours ahead,” writes NASA’s Tony Phillips for SpaceWeather.com. “NOAA forecasters estimate a 55 percent chance of additional M-class flares and a 10 percent chance of X-flares on Dec. 28th.”

Flares and CMEs are different beasts triggered by the same magnetic phenomenon. During periods of high magnetic activity on the sun, the sun’s internal magnetic field forces its way through the sun’s photosphere (colloquially known as the sun’s “surface”). This magnetism exposes the inner sun, which is counter-intuitively cooler (and therefore appears darker) than the sun’s chromosphere (the layer of atmosphere above the photosphere) and corona (the sun’s extended and multi-million degree atmosphere). Therefore, magnetically active regions can be easily seen on the sun’s disk as spots and clusters of dark spots known as “sunspots.”

As the magnetic field lines become forced together above these sunspots, magnetic reconnection may occur, accelerating solar plasma to relativistic speeds, generating intense bursts of radiation. These are solar flares and their radiation reaches Earth in minutes. However, CME’s are bubbles of magnetized high-energy plasma that are ejected into space at high speed, but nowhere near relativistic speeds. CMEs can reach Earth in several hours or a few days, depending on the ferocity of the eruption.

And today’s flare and CME happened to be generated by the same sunspot that was Earth-directed, maximizing our chances of having a geomagnetic storm right in time for New Year’s. So if you live in high latitudes, and pay attention to the sky, you may be in for a New Year treat as high-energy solar particles impact our atmospheric gases, generating bright aurora.