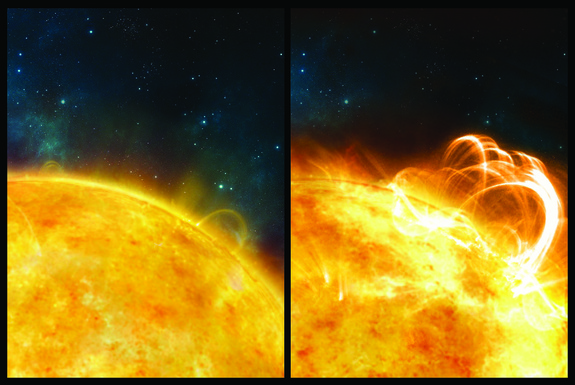 The sun is capable

of firing off an incredibly powerful superflare that could wreak havoc on Earth’s technology-dependent society, a new study suggests.

the “normal” flares of high-energy radiation emitted by the sun and superflares blasted out by faraway stars, which can be thousands of times more powerful, researchers found.

This result “supports the hypothesis that the sun is able to produce a potentially devastating superflare,” study co-author Anne-Marie Broomhall, from the University of Warwick in England, said in a statement.

Kepler is sensitive enough to pick up

“Occasionally, solar flares contain multiple waves superimposed on top of one another,” lead author Chloe Pugh, also of the University of Warwick, said in the same statement. “We have found evidence for multiple waves, or multiple periodicities, in a stellar superflare, and the properties of these waves are consistent with those that occur in solar flares.”

Strong solar flares can cause temporary radio blackouts, and they’re often accompanied by massive explosions of solar plasma called coronal mass ejections (CMEs) that can be even more disruptive. Powerful

So the consequences of a superflare (and possible associated super-CME) could be disastrous, Pugh said.

But you shouldn’t worry too much about this worst-case scenario, she added.

“Fortunately, the conditions needed for a superflare are extremely unlikely to occur on the sun, based on previous observations of solar activity,” Pugh said.

The new study was published in The Astrophysical Journal Letters.