Spearfish — The mystery of what caused Monday’s loud boom remains. Some theories have been refuted, while more mysterious references have appeared. Shortly before 2 p.m., the boom was heard throughout the Black Hills. Some people said it shook their homes or businesses, rattling windows, and scaring them in several instances. But the noise was heard in a much larger … Continue reading →

What Caused the ‘Sonic Boom’ over Hildenborough, Not Likely the Red Arrows

Residents of Kent have reported hearing a “sonic boom” in the skies over Kent this morning. The loud bang was reported by residents of Hildenborough, near Tonbridge, just after 10.30am. Some people who heard the sound said they saw the Red Arrows, the Royal Air Force Aerobatic Team, fly by. The bright red jets are scheduled to take part in … Continue reading →

A mysterious booming noise in a small California town has residents baffled, and has sparked many conspiracy theories. Every weekday, between 11 a.m. and 2 p.m., a thunderous noise rocks through Sonora, California, according to locals. The cause of the mysterious booms remains a mystery, with local residents pointing to everything from mining operations to aliens. Glen White, a local … Continue reading → 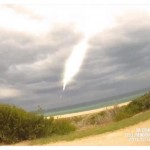 Australian Catches Close-Up Footage of Meteor Fireball – Be Ready For That Crazy BOOM!!

Melbourne — A man testing out his body camera at a Victoria, Australia, beach captured video of a suspected meteor falling to earth nearby. The video, posted to YouTube (see below) by Overwatch Security, features body camera footage filmed by a worker for the firm as he walked on a Victoria beach on a stormy day. The man faces out … Continue reading →