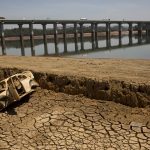 Water scarcity already affects more than 40 percent of the world’s population, with one in four people projected to face chronic or recurring shortages by 2050. Cities are at the forefront of the problem. Drought-stricken Cape Town could run out of water as soon as April, but South Africa is not alone in its struggle as ever more world cities … Continue reading → 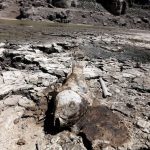 As the clock struck midnight on Jan. 1, residents of Cape Town, South Africa, ushered in 2018 – the start of a new year and the start of the city’s stringent new water regulations. The Level 6 restrictions came into effect to combat an unprecedented drought which threatens to make Cape Town the first major city devoid of water. The … Continue reading → 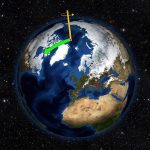 Earth does not always spin on an axis running through its poles. Instead, it wobbles irregularly over time, drifting toward North America throughout most of the 20th Century (green arrow). That direction has changed drastically due to changes in water mass on Earth. Droughts are causing Earth to wobble on its axis, according to new research. Scientists have long known … Continue reading → 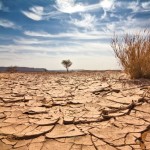