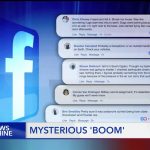 People across northern Utah reported feeling and hearing what seemed like a sonic boom Saturday. The boom happened around 11 a.m. and was especially felt in Ogden and surrounding cities. Calls and emails flowed into the Fox 13 newsroom asking what caused the boom. Most felt it was a sonic boom caused by jets or other aircraft at Hill Air … Continue reading →

An unexplained “boom” is causing confusion across our viewing area, as we’ve had reports of homes shaking, a loud boom, and no visible sign as to what could have caused it. People from Warsaw to Mishawaka and up into Michigan are describing a boom that occurred around 6:30 Sunday night. Every person WSBT 22 talked to said it seemed like … Continue reading →

It remained unknown Sunday morning what caused a mysterious, explosion-like noise that rattled the windows of homes in Paxton on Saturday night and could be heard in towns as far as 30 miles away. Speculation over what may have happened continued well into Saturday night on social media and into Sunday morning at local cafes and coffee shops. Some wondered … Continue reading →

At About 10:30 this morning, something went boom over the Columbus region. The loud noise rattled windows in midtown Columbus and could be heard as far away as the backwaters on Lake Harding. The last time this happened it was an aircraft from Robins Air Force Base in middle Georgia; Base officials were contacted Friday afternoon and said it was … Continue reading →

A bizarre sound that shook homes in the New Gloucester area had the town buzzing Sunday morning. Carrie Madura said, “I thought something exploded.” “It sounded like sonic boom almost kind of like a cannonball maybe,” Jennifer Everest said. “I couldn’t quite figure it out there were no flashes of light along with it or anything so I was really … Continue reading →

A video of unexplained booming sounds was shared by YouTuber ‘Christine Diamond’. The ‘crazy sounds’ were heard in the skies of Delaware County, Pennsylvania on December 2, 2018. ‘Christine’ states: “People around here keep insisting it was a firework show in the next town. However the sound was very loud and deep it did not sound like a firework show.” … Continue reading →

The cause of an enormous bang that shook houses across Coventry remains a mystery. It comes as defence chiefs denied the incident was caused by fighter jets flying at supersonic speed. The incident on Sunday night sparked a major 999 operation as police and fire crews searched for the source of the ‘explosion’ which appeared to be centred in Longford. … Continue reading →

Two mystery ‘explosions’ were heard across large parts of Doncaster early this morning. People across town reported hearing two loud bangs with residents in Edenthorpe, Kirk Sandall and Barnby Dun among those hearing the noise between 5.30am and 6am. On Facebook, Fiona Stocks wrote: “what the hell were those two explosion sounds just now? They were too loud for a … Continue reading →

It rattled windows, shook buildings and sounded like a thunder clap out the front door. At about 10 a.m. Monday, a sonic boom struck Tillamook – the result of an aircraft breaking the sound barrier. “911 had numerous calls about it,” Tillamook County Emergency Management Director Gordon McCraw said. “One dispatcher said someone called wanting to report an explosion.” Prior … Continue reading →