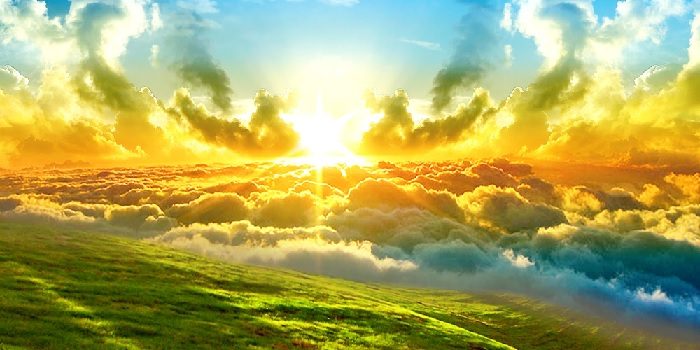 There is one original set of lyrics meant to accompany the music, written by Horace Lorenzo Trim:

Day is done, gone the sun,
From the lake, from the hills, from the sky;
All is well, safely rest, God is nigh.

Fading light, dims the sight,
And a star gems the sky, gleaming bright.
From afar, drawing nigh, falls the night.

Thanks and praise, for our days,
‘Neath the sun, ‘neath the stars, neath the sky;
As we go, this we know, God is nigh.

Sun has set, shadows come,
Time has fled, Scouts must go to their beds
Always true to the promise that they made.

While the light fades from sight,
And the stars gleaming rays softly send,
To thy hands we our souls, Lord, commend.

“All is well” – whatever has happened, happened – but God is in total, precision control at all times

Earthquakes, volcanoes, tsunamis, hurricanes, tornadoes and wars destroy lands and people, but “All is well…” Everything is under perfect, precise control.

The song originated when a Union Soldier happened to hear a mournful cry from a Confederate Soldier, who was wounded, begging for help on the battlefield. That Soldier was his dying son and that incident caused the father to write, “Taps.”

Wikipedia.org says it this way: “There are several legends concerning the origin of “Taps”. The most widely circulated one states that a Union Army infantry officer, whose name often is given as Captain Robert Ellicombe, first ordered “Taps” performed at the funeral of his son, a Confederate soldier killed during the Peninsula Campaign.”

God working through His Son is the One Who causes the entire Universe to continually balance out such that “All is well,” by righting wrongs and insuring that justice and a precise balance is always maintained in the Universe – in the long run – which may extend into the next life.

The Primary Rule [Rule # 1] in the Universe is that God Always Wins and those who side with Him are included in that Rule. Romans 8:28, “And we know that all things work together for good to them that love God, to them who are the called according to his purpose.”

One might say it automatically happens that way regardless of how well things may have been planned otherwise. Although pantheism isn’t entirely the case, it’s close, as everything exists through the Power of God’s Word and continues to exist by His Permission – whether to discipline or test His people or to allow evil enough rope to hang themselves.

“Taps” also signifies the END, and in this case this author believes this present age of grace is near it’s End!