Seismic, volcanic and magnetic North Pole migration indicators all say Earth has one more month remaining in the current earth change lull period (L), before entering the predicted earth change uptick period (U) in the first week of February 2016. Seismic chart data for Week 49 of the 2015 Cycle shows a dramatic ‘decrease’ in weekly 6 and 5-magnitude earthquake events, as you can clearly see in the year-over-year values below:

We expected to see a bounce in the 2.5 to 4-magnitude earthquake events with just 214 last week that was too low with 185 expected for the first week of February 2016. We should see this value gradually diminish over the coming month, if the seismic patterns continue for the remainder of the current 2015 Orbit Cycle. Do not be surprised to see the 5 and 6-mag quake events bounce higher over the next few weeks, until they also settle to a low for the first to second week of February 2016.

You will see the current 2014/2015 Seismic Chart continue growing, until we reach the end of the 2015 Earth Orbit Cycle relative to the inbound Black Star. Then I will save the entire chart in PDF form and place a copy of the file in the 2016 Newsletter Dropbox Folder and post a link with each new report allowing everyone the opportunity to check the 2014 seismic information, as the new 2015/2016 Seismic Chart grows with each new volume for the 2016 Orbit Cycle to make things easier.

We are entering a pivotal period in the Project Black Star Investigation, as we are about to have the data required to know when the Earth reaches that magical 90-degree position relative to the Sun and inbound Black Star now positioned on the right side of the Libra Constellation moving left in the orbit diagram just below the ecliptic plane. My gut feeling is that our minimum values for the key 2.5 to 4-magnitude earthquake events will reach the minimum value in the first week of February giving us the Jolt Value (J) in the second week pointing to a May 7, 2016 nearside-alignment quake event (N) like we saw last year on April 25, 2015 with the 7.8 Nepal Quake predicted far ahead of time by the research. I understand that many believe the Black Star should speed up reaching Earth Orbit Path and the expected perihelion event with our Sun, but the science is actually saying something else at this point in the investigation. Look at what the data says from the nearside-alignment quake event dates:

February 27, 2010, March 11, 2011, March 20, 2012, April 1, 2013, April 13, 2014, April 25, 2015. Note carefully that we are seeing an average of 11-12 days added to each previous date revealing a pattern that should explain orbit diagram leftward movement of a large-mass object on a ‘circular orbit path’ that appears nonsensical for our Black Star definitely on a long elliptical orbit path. The Black Star would actually have to ‘slow down’ in orbit along the elliptical orbit path to have this kind of regular pattern, which only makes sense if the Black Star is behaving more like a black hole and slowing down from interaction with the Sun and the solar wind; as Black Star electromagnetic potential increases with nearing Sun/Black Star proximity and shortening of the Sun/Black Star magnetic portal connection. While there is insufficient input data for drawing
definitive conclusions, the explanation for the seismic pattern appears to be connected to the Sun/Black Star relationship and the fact that the Black Star sits inside an extremely-deep gravity well surrounded by an event horizon from which no light across the entire electromagnetic spectrum can escape; while providing the Black Star with characteristics/properties that defy the Laws Of Physics for known/cataloged celestial objects. In other words, The Sun and solar wind are interacting with the Black Star event horizon in such a way, and the Black Star has the inherent ability to change spacetime in such a way, that Black Star velocity is actually slowing down in proportion to Black Star/Sun near proximity.

Right now the best predictive model at our disposal says the Earth will reach outside-orbit position right on schedule in the first week of February 2016. The next earth change uptick period will begin with a big Jolt in the 2.5 to 4-magnitude earthquake events, until we see the big Jolt for the 6-magnitude earthquake events in Week #5 of the coming cycle. The earth changes will continue escalating higher all the way through May 2016 with another Sun/Earth/Black Star nearside-alignment quake event on May 7, 2016. My model will be proven 100-percent accurate with a big Pacific Ocean/Ring of Fire quake event on that precise day giving us another 12-13 days added for a May 20, 2017 Black Star/Earth Crossing Event on the next Earth Orbit Cycle. Obviously new data can change things, but this is the likely scenario from all the evidence on hand today.

Earth saw five new volcanic eruptions this week again on the high end of the scale as predicted, as magma upwelling continues around the globe from our recent flurry of extremely deep/large earthquake events, as Earth passed behind the Sun generating the two 7.7 Peruvian Earthquake Events at more than 600 kilometers deep. We have seen some fairly-large 6-mag earthquake events recently, but I do not expect to see another big 7 event until around March 1, 2016 once the coming earth change uptick period begins and Earth core has time to heat up again to generate a new round of seismic activity. Keep focus on the US/Canada West Coast that is in the eye of the coming seismic/volcanic storm, as the two subterranean magma waves pick up steam/momentum with coming earth change uptick periods; until Yellowstone threats become the subject of concern around the globe. 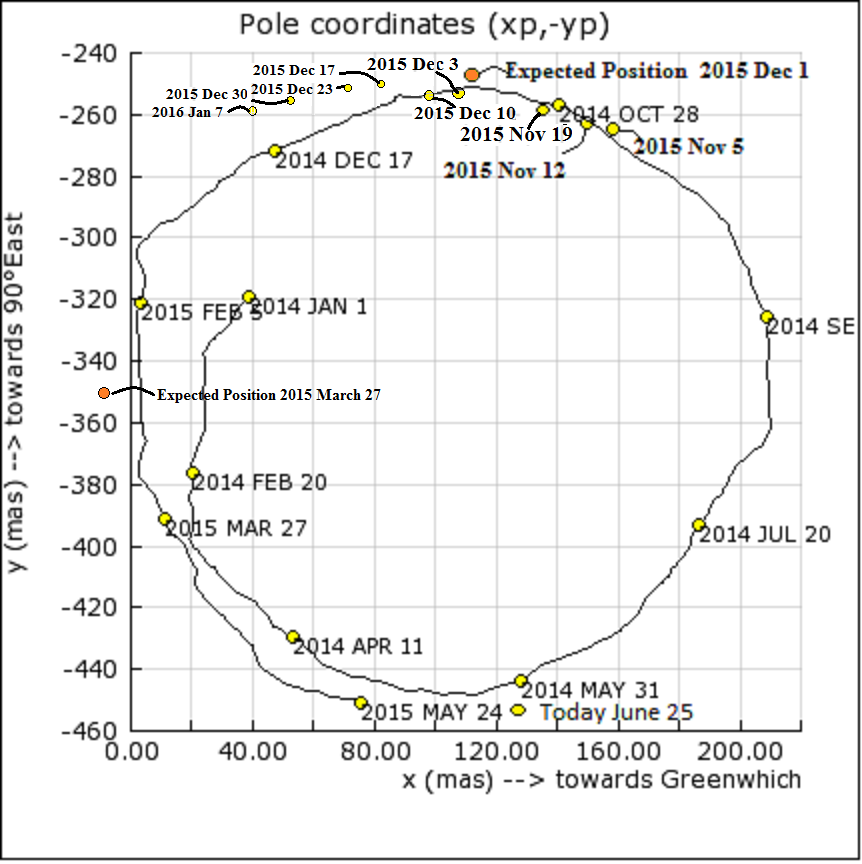 The magnetic North Pole is migrating rapidly towards the 0.00 X line as predicted and should make the rapid dip at outside-orbit position about two weeks later than last year to reach the predicted position on March 27, 2016. Remember that we are seeing the same two-week delay in the magnetic North Pole migration chart that we see in the 2014/2015 Seismic Chart, because the Black Star is moving left in the orbit diagram and our planet takes that much longer to move in natural orbit around the Sun to produce the same data for our predictive models. I am actually quite shocked that nobody else running their own Planet X/Nibiru/Black Star Investigations has recognized the connections between the seismic pattern and the migrating magnetic North Pole pointing to the influence of another powerful magnetic already in the inner solar system.

Project heroes for this week include Michael, Joshua and Don who subscribed to Terral’s 2016 Newsletter. William, Albert, Morton, Gerald and Carlton renewed their subscriptions. I am proud to announce that Carlton, Gerald, Morton and Albert are SuperSubscribers, as each has been a loyal supporter of the research since the first month of the first year the program began in January 2012. Greg also became a Super/Subscriber and Lifetime Supporter making a nice donation to support the research. Randi and Dennis also made donations to the research and both have surpassed the 100-dollar support level to become SuperSubscribers with Lifetime Memberships like Vobear, Brian and Brian. Many other SuperSubs will be mentioned in these update reports moving forward, as subscription renewals continue coming in for 2016. Thank You to everyone supporting the research for making the investigation possible.

Special Announcement: The process of sending out 2016 Newsletter/Dropbox Folder Link Notification Emails has started with a few mishaps. My Gmail account was locked again yesterday for a period, but was unlocked this morning; and hopefully things continue to run smoothly. Remember that the first four volumes of Terral’s 2016 Newsletter are uploaded to the “2015 Newsletter Dropbox Folder” giving me time to get all of my ducks in a row through this transition period, until all newsletter subscribers and contributors have been sent the notification email with the updated Dropbox Folder Link and related information. The 2016 Notification Email includes a lengthy YouTube Video with instructions on how to get more from your Terral’s 2016 Newsletter Subscription that includes longer YouTube Video Update Reports with more weekly information and links to recent radio shows on the final page of each volume. Special thanks go out to Bill, the owner/operator/administrator of the http://terral03.com website, for all he has done for the Project Black Star research over the years from day one and at his own expense. Bill and New, who sends in the weekly earth change articles, have been my key contributors and supporters from the very beginning and without them this research/investigation would not be possible.